Angela Faye Kinsey is an American actress famous for her role as Angela Martin in the NBC television sitcom series ‘The Office’ (2005–2013). She was born on June 25, 1971.

Kinsey played a recurring part on the TBS comedy ‘Your Family or Mine’ and also in the Netflix series ‘Haters Back Off.’ 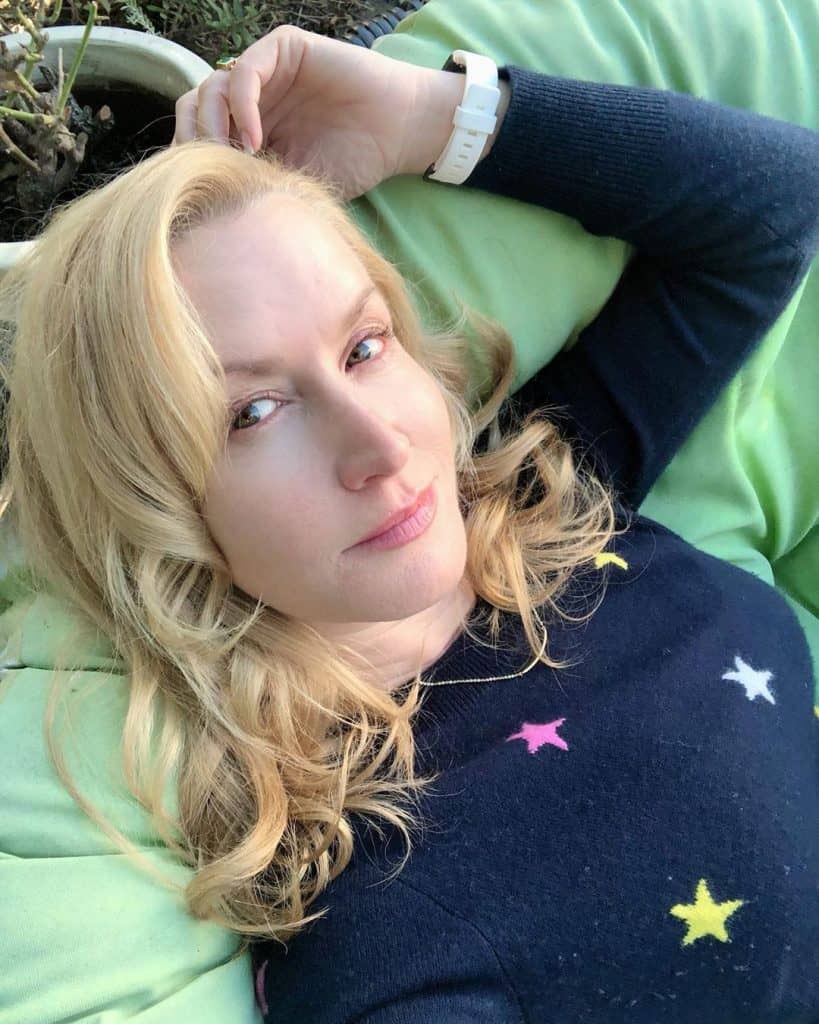 Angela Kinsey, an American actress, has a net worth of $12 million. Most importantly, she is a renowned actor who has portrayed the character of Angela Martin on the TV show ‘The Office.’

Kinsey’s father used to work as a drilling engineer. They resided in Indonesia for 12 years. There she joined the Jakarta Intercultural School. She learned the Indonesian language during this time, and she still speaks it occasionally. Later, her family returned to the United States and resided in Archer City, Texas.

Furthermore, Kinsey attended Baylor University and studied English. However, there she became an active member of the Chi Omega organization, “took as many theatre classes as possible.” She had participated in the “Baylor in London” program.

In a 2007 interview with the Baylor student newspaper, she talked about the influence of her years at the university, where she said, “It was the perfect place for me to grow into who I am and take the belief system that I had and incorporate it into my life. It was a great place to go to school.”

Kinsey had graduated from Baylor in 1993. After her graduation, she served as an intern on the NBC talk show ‘Late Night with Conan O’Brien.’ Kinsey had described her work as an “awesome” experience of her life.

Kinsey had worked there to help the show’s bandleader drummer Max Weinberg. Thus, that experience motivated Kinsey to acquire a coast-to-coast road trip with her friend from New York City to California.

After moving to Los Angeles, Kinsey took improvisation classes with The Groundlings and at iO WEST which was formerly known as “Improv Olympic West.”

Following a two-woman show at iO, she worked as an operator at 1-800-Dentist and at the same time she successfully made small one-episode appearances in various sitcoms.

Kinsey was called back for the audition for the character of Angela Martin soon after producers told her she was “a little too feisty for Pam.”

Kinsey received the ‘Daytime Emmy Award’ for Outstanding Broadband Program – Comedy in June 2007. In short, she received the award for her work on the series ‘The Office’: Accountants, which is a series of webisodes.

Kinsey belongs to one of several cast members of the series ‘The Office’ who have a role in License to Wed as well. The film was directed by Ken Kwapis, who often had directed episodes of The Office.

Besides, Kinsey worked as the new spokesperson for Clairol hair products in summer 2011. She appeared in television ads for ‘Clairol Nice ‘n Easy.’

Kinsey cast in the Hulu comedy series ‘The Hotwives’ in 2014. The next season returned for season two on August 18, 2015. She appeared in a film ‘All-Stars’ along with Lance Kinsey in the same year.

Kinsey also appeared in the Netflix Original Series ‘Haters Back Off.’ She portrayed the role of Bethany, the mother of the main character, Miranda Sings. She worked along with YouTube star Colleen Ballinger, as Miranda, and also worked with Steve Little, as Miranda’s uncle, Jim.

Kinsey’s first season work met with relatively mixed reviews for which she received critical acclaim for her performance.

Angela Kinsey married writer and producer Warren Lieberstein who was the brother of Paul Lieberstein, on June 18, 2000. For instance, he also had played the role of Toby Flenderson on The Office.

The couple had their child, Isabel Ruby Lieberstein, on May 3, 2008. Kinsey and her husband had separated on February 18, 2009, and it was reported by Us Weekly.

Later, one of her representatives mentioned that the two continue to be friends. Kinsey filed for divorce on June 2010, a source announced where she cited “irreconcilable differences”. However, the pair remains in a good relationship.

Kinsey announced her engagement with her boyfriend on August 4, 2016, on Instagram where she enclosed a detailed summary of the proposal. Consequently, Kinsey married her long-time boyfriend Joshua Snyder on November 13, 2016.

Kinsey is Presbyterian (a part of the reformed tradition that traces its origin to Britain, particularly Scotland, and Ireland). She attends Bel-Air Presbyterian Church. According to Kinsey, her grandmother does not watch the series ‘The Office’ because she feels that the lead role of Michael Scott is too “vulgar”.

Kinsey supports Alley Cat Allies organization. Consequently, It is a nonprofit advocacy organization that helps to transform communities for the protection and improvisation of the lives of cats.

In 2007, Kinsey received Screen Actors Guild Award in Outstanding Performance by an Ensemble in a Comedy Series ‘The Office.’

In 2008, Kinsey again won Screen Actors Guild Award in Outstanding Performance by an Ensemble in a Comedy Series ‘The Office’. However, she has also received TV Land Awards in Future Classic.