Moss, the powerful actress, started her career as a ballet dancer before appearing in the movie ‘The West Wing.’ She worked as Peggy Olsen in ‘Mad Men’

The movies ‘Girl,’ ‘Interrupted,’ ‘Virgin,’ ‘Listen Up Philip,’ ‘The One I Love,’ ‘Truth,’ ‘Queen of earth,’ and ‘The Square,’ are the consequences of Moss’s work. On the other hand, she was also nominated for the ‘Tony Award’ for Best Actress in a play ‘The Heidi Chronicles’ by Wendy Wasserstein and West End production of Lillian Hellman’s ‘The Children’s Hour.’

Moss was given the name “The Queen of Peak Tv” by ‘Vulture’ for ‘Mad Men, Top of the Lake,’ and ‘The Handmaid’s Tale.’ 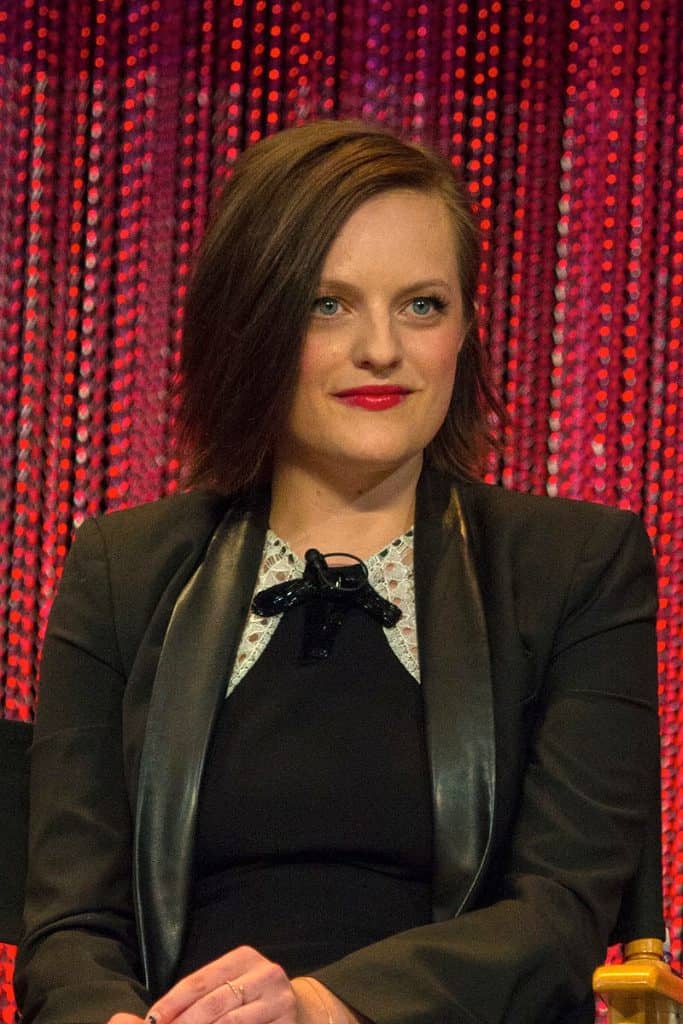 Moss holds a net worth of $8 million US dollars, and she has a salary of $ 175K per episode on TV series. However, her source of wealth is film and television.

Elisabeth Moss was born and raised in Los Angeles, California. However, her parents are Ron, and Linda Moss, both of them were musicians. She has a young brother as well.

Moss grew up in the church but rarely talks about her association with the Church; she says that the Church has facilitated her to become who she is today.

During her early days, she wanted to become a dancer. Later she traveled to New York City to study ballet at the School of American Ballet. She studied with Suzanne Farrell at the Kennedy Centre in Washington, D. C.

She gave continuity to her dance throughout her teenage, and at the same time, she acquires the acting profession as well. She began homeschooling to balance her education and career and graduated later in 1999.

Moss met Fred Armisen in October 2008 and got engaged in January 2009. They married on October 25, 2009, in Long Island City, New York. But, they divorced on May 13, 2011. Moss rarely talks about her personal life. She prefers to maintain privacy regarding these things. However, the couple filed for divorce in 2010, where they cited “irreconcilable differences” as the very reason for their split.

Moss also holds citizenship of the United Kingdom because of her father, who is half British.

Moss practices Scientology. She is identified as a feminist.

Moss has other alternative names, and they are Elisabeth Moss, Elizabeth Moss, and Liz Moss.

She played in the Hulu series ‘The Handmaid’s Tale’ for which she was honored by critical acclaim and a ‘Primetime Emmy Award for Outstanding Lead Actress in a Drama Series.’ She worked in the movie ‘Virgin’ for which she was nominated for ‘Independent Spirit Award’ in 2004.

She was also nominated for the ‘Tony Award’ for the play ‘The Heidi Chronicles’ (2014).

Moss is the winner of two Golden Globe, for BBC Miniseries ‘Top of the Lake’ and Hulu series ‘The Handmaid’s Tale.’

Moss appeared in the NBC miniseries ‘Lucky Chances’ which was her first screen role in 1990. She played the role of Cynthia Parks in seven episodes of the TV series ‘Picket Fences.’ She gave voice work of Holly DeCarlo for the TV special ‘Frosty Returns’ (1992) and also provided voice work in the animated movie ‘Once Upon a Forest’ as Michelle.

Also, she gave voice work of Holly DeCarlo who is the main character in the TV special ‘Frosty Returns’ (1992). Moss also has provided the voice work of Michelle in the animated film ‘Once Upon a Forest’ (1993). She worked in the movie ‘Gypsy’ (1993).

Later she also worked in the television remake of the 1993 film Gypsy, where she played Harvey Keitel’s younger Daughter in the movie ‘Imaginary Crimes’ (1994).

For instance, she worked in the remake of the Walt Disney Pictures film ‘Escape to Witch Mountain’ (1995). However, she appeared as a young Ashley Judd in the TV-movie biopic ‘Love Can Build A Bridge’ (1995). She provided a supporting role in the drama ‘Separate Lives’ (1995) opposite Jim Belushi and Linda Hamilton.

Moss had a supporting role as a patient in a mental institution for the movie ‘Girl’ created by James Mangold. However, she also had a minor role as Katie Brockett in the movie ‘Mumford’ (1999), where she played the daughter of a woman with a shopping addiction.

She played a young Ashley Judd in the TV-movie biopic ‘Love Can Build A Bridge’ (1995). Furthermore, she played a supporting role in the drama ‘Separate Lives’ (1995). She had just a minor part in the black comedy ‘The Last Supper’ (1995).

Elisabeth Moss worked in the movie ‘Virgin’ for which she was nominated for ‘Independent Spirit Award’ in 2004.

Moss worked in the movie ‘Heart of America’ and three other movies in 2004. Consequently, in the same year, she made the movie ‘Virgin’ for which she was nominated for ‘Independent Spirit Award’

She appeared in horror film ‘The Attic’ by Mary Lambert’s and the independent drama ‘Day Zero’ in 2007. For instance, Moss had her Broadway debut by playing the role of Karen in ‘Speed-the-Plow’ by David Mamet in October 2008.

Moss has established her career as a producer as well. She is the producer of Movie ‘Shirley,’ ‘Her Smell,’ and ‘Queen of Earth.’ She is executive producer of the documentary ‘Ballet Now’ and TV series ‘The Handmaid’s Tale.’

Moss played in ‘Excedrin commercial’ (2005). After that, she acted in a TV commercial for Secret Platinum (2005). Additionally, She portrayed herself on FOX “Totally for Kids” (1990) Internals.

Elisabeth Moss and Michael Stuhlbarg are set to work in upcoming Psychological thriller movie Shirley which is basically based on the life of horror writer Shirley Jackson.

Jackson was an American gothic horror writer who is best known for her short story ‘The Lottery’ and the novel ‘The Haunting of Hill House.’

Moss is going to play the main character of Shirley Jackson.

Moss’s mother is a musician and father manages jazz musicians.

She is a lifelong member of the ‘Church OF Scientology.”

She studied ballet with Suzane Farrell at the Kennedy Centre in Washington, D. C.

According to her, her favorite role she has played has been Robin Griffin in ‘Top of The Lake” (2013)

Elisabeth Moss had to face serious controversies because of her speaking of the Emmys. She dropped a lot of F-bombs and other profanities while accepting the award.

Moss was criticized for her speech during the acceptance of ‘Golden Globes’ award in 2018.

‘The Handmaid’s Tale’ star and thirty-six-year-old actress Moss was spotted kissing a mystery man over the weekend in New York City. She was spotted spending her Saturday night at the Black Door bar with the unidentified male. They were seen kissing on the street at about 2 am.

She was dressed in a short-sleeved, knee-length black dress and carried a white purse.

She was also seen in ‘The Ellen Show’ joining Ellen in the interview. Moss redeemed herself with twerking Skills. Moreover, the actress talked about carrying her ‘Golden Globe’ through the TSA security line and being a champion napper.

Elisabeth professional pictures can usually be seen in the Instagram wall.

In August Moss tweeted; “I work in a really incredibly collaborative atmosphere on my show that I’ve never experienced before- and I’ve been around for a while.”

Her acting is seriously appreciated by many people. Many people have criticized her work positively on twitter.