James Marsden was born on September 18, 1973. He is an American actor, former Versace model, and singer. Marsden started his acting career by guest-starring in television series like:

Marsden gained positive acclaim with his portrayal of Scott Summers/Cyclops in the ‘X-Men’ film series. He had starred in 2006’s ‘Superman Returns.’  Marsden has starred as gunslinger Teddy Flood since 2016. It was a sentient android, in the HBO science fiction-western thriller series named ‘Westworld.’ 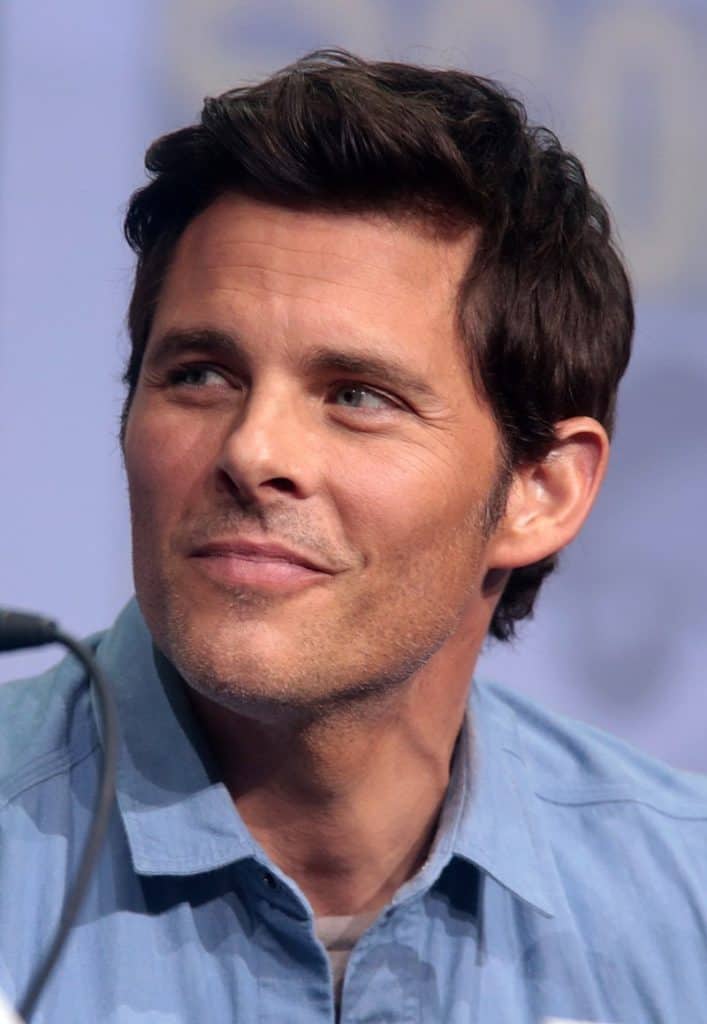 Accordingly, he got his breakthrough in comic book films as well. Marsden later went on to star in various genre films. He acted for 2007’s ‘Hairspray.’ The film critically acclaimed and had commercial success and won many awards for its ensemble cast.

He sang two songs as Corny Collins, for the film’s soundtrack which has been certified Platinum by the RIAA. However, Marsden also had starring roles in family-friendly films such as ‘Enchanted’ and ‘Hop’ and leading roles in ‘27 Dresses’ and ‘The Best of Me.’

James Marsden also starred in a range of independent films such as ‘Small Apartments,’ ‘Bachelorette,’ and ‘Robot & Frank.’

Marsden portrayed the role of President John F. Kennedy in ‘The Butler’, which is the production of Lee Daniels. Marsden played a supporting role as an antagonist in ‘Anchorman 2: The Legend Continues.’

An American actor has a net worth of $8 million.

James Marsden was born on September 18, 1973, in Stillwater, Oklahoma. His mother name is Kathleen whereas his father name is Luther Marsden. They got divorced when James was nine years old.

Marsden father James Luther Marsden who was head of food safety at Chipotle Mexican Grill was also formerly a professor of animal sciences and industry at Kansas State University.

He had joined Hefner Middle School and Putnam City North High School located in Oklahoma City. Marsden later went on to attend Oklahoma State University from where he studied broadcast journalism. He chose instead to move to Los Angeles to pursue his acting career.

Marsden also has a son who was born in 2012, with his former girlfriend, Rose Costa. Rose Costa is a Brazilian model.

Marsden first appeared in a series of episodes of The Nanny as Eddie, Margaret Sheffield’s boyfriend. Marsden then went on to star in the Canadian television series ‘Boogies Diner,’ which aired in 1994 for one season.

During the end of ‘Boogies Diner,’ he guest-starred on other television shows such as ‘Saved by the Bell: The New Class’ and ‘Party of Five.’ Marsden later appeared in the ABC show ‘Second Noah.’ He appeared in a lead role in the drama film ’54.’ The movie later went to Ryan Phillippe because Marsden lost out to Edward Norton for a role in ‘Primal Fear.’

Marsden later went on to star in ‘Disturbing Behavior’ opposite Katie Holmes. He also worked for the film ‘Gossip’ opposite Kate Hudson.

Marsden also appeared in the legal comedy-drama television series ‘Ally McBeal.’ He played as one of the main cast members during the first half of season 5. There he showcased his musical abilities.
Marsden appeared in a 1998 episode of “The Outer Limits.”

Marsden appeared as Cyclops in the ‘X-Men’ films. His role is essential in the comics. Notably, Marsden also appeared in the film ‘Superman Returns,’ directed by Bryan Singer. Later, Singer dropped out of the third installment for the direction of ‘Superman,’ where Marsden appeared as Richard White, Lois Lane’s fiancé. However due to his conflicting schedule, Marsden’s screen time in ‘X-Men: The Last Stand’ was reduced, inspiring controversy from fans of the comics.

Marsden’s character of Cyclops in the films was well praised and provided him a Blockbuster Award for Best Supporting Actor. Marsden reprised his role of Cyclops in 2014, in a brief cameo for ‘X-Men: Days of Future Past.’ The film added a few of the original actors from the first film including Anna Paquin and Famke Janssen.

James Marsden had his breakthrough with comedy films in between 2004–11.

Marsden co-starred with Rachel McAdams in 2004. Moreover, Ryan Gosling, James Garner, and Gena Rowlands were in the romantic drama ‘The Notebook’ based on the Nicholas Sparks novel of the same name as Lon Hammond, Jr.,

Marsden appeared for his close similitude to Garner, who played the older Noah Calhoun. Thus, while Gosling is portraying, the younger Noah Calhoun looked nothing like Garner.

Marsden appeared as Corny Collins in 2007, in the film adaptation of the Broadway musical ‘Hairspray’ (American Musical) which was based on the 1988 John Waters film of the same name.

In the same film, he sang two songs, “The Nicest Kids In Town” and “(It’s) Hairspray.” Both “Hairspray” and its soundtrack were critically acclaimed and praised. The song was sold over 1,200,000 copies to date in the United States, and it also was certified Platinum by the RIAA.

Marsden next role was along with Amy Adams in the Disney hybrid animated/live-action film ‘Enchanted.’ He portrayed the character of Prince Edward.

Marsden had sung one song as a duet with Adams at the beginning of the film, a duet with Idina Menzel which was not included in the film. ‘Enchanted’ received critical acclaim and proved to be a commercial success with the earning of more than $340 million worldwide at the box office.
With the successes in 2007’s ‘Hairspray’ and ‘Enchanted,’ Marsden played the male lead in the 2008 romantic comedy film ‘27 Dresses’ opposite star Katherine Heigl. The film grossed $160 million worldwide.

Marsden also appeared in the teen comedy ‘Sex Drive.’ The film was a moderate success, but Marsden’s performance was heavily praised. For that reason, Marsden also received a ‘Teen Choice Awards’ nomination for Choice Movie Actor in a Comedy for his perfect roles in ‘Enchanted’ and ‘27 Dresses.’

Marsden also played the male lead in the film ‘The Box’ in 2009. The film was based on the 1970 short story ‘Button, Button.’ It was written by author Richard Matheson. The film was earlier made into an episode of ‘The Twilight Zone.’ Marsden appeared opposite Cameron Diaz in the film and re-united with Superman Returns co-star Frank Langella.

In 2010, Marsden appeared in the comedy ‘Death at a Funeral’ along with Chris Rock, Luke Wilson, Danny Glover, and Columbus Short. The film was a remake of the 2007 British film of the same name.
In January 2011, Marsden was cast on ‘Modern Family,’ portraying a homeless squatter of Cam and Mitchell. In April of the same year, Marsden was cast as the male (live-action) lead in ‘Hop,’ an Easter-themed comedy co-starring Russell Brand as the Easter Bunny.

The film was granted a commercial success, opening at the top of the weekend box office which also grossed over $100 million in the U.S. box office.

However, ‘Hop’ generally received negative critical acclaim. Marsden played the lead in the remake of ‘Straw Dogs’ in 2011, reuniting with ‘Superman Returns’ co-star Kate Bosworth. Because of a marked departure from previous roles, the film had mixed reviews and ultimately ended up being a box office flop.

Marsden had a transition to independent films and supporting work since 2012.

In 2012 and 2013, Marsden was cast in a recurring role in the sixth and seventh seasons of ‘30 Rock.’ He had portrayed the role of Criss Chros who is the boyfriend of the series’ main character Liz Lemon.
Altogether, Marsden range of films was almost independent films which included ‘Robot & Frank,’ Small Apartments, Bachelorette, and ‘As Cool as I Am.’

Marsden co-starred with Denzel Washington and Mark Wahlberg in the action film ‘2 Guns’ in 2013. The film debuted at number one in its weekend release.

Soon after, Marsden appeared in Lee Daniels’ historical drama ‘The Butler,’ playing the role of President John F. Kennedy. The film opened at the top spot and received positive reviews.

Marsden was portrayed as Jack Lime in ‘Anchorman 2: The Legend Continues’ which was a rival reporter to Will Ferrell’s Ron Burgundy.

The next year, Marsden reprised his role as Scott Summers for the first time in eight years in ‘X-Men: Days of Future Past’ in a cameo. However, Marsden also played the character of Teddy Flood in HBO’s 2016 series ‘Westworld.’ He was set to star in Paramount’s upcoming film adaptation of Sonic the Hedgehog.

According to a news source, Westworld‘s James Marsden and veteran actor Ed Asner are set to co-star opposite Linda Cardellini and Christina Applegate in ‘Dead to Me.’ It’s a Netflix’s half-hour dark comedy series written by Liz Feldman, Will Ferrell and Adam McKay’s Gloria Sanchez Prods, and CBS TV Studios.

People have the confusion that he is the brother of actor Jason Marsden. In fact, they do not relate to each other. They are good friends instead, and their respective wives have been friends since they were six.

He is a son-in-law of Dennis Linde who was an American country songwriter. Marsden ancestry belongs to English, German, some Scottish, and distant French.