John Joseph Travolta was born on 18th February 1954. He is a producer, dancer, and singer. Travolta became famous in the year 1970s. He appeared on the television series Welcome Back, Kotter from 1975 to 1979. Furthermore,  John appeared in the box office hit Saturday Night Fever released in 1977 and Grease released in 1978. One year after starring in Welcome Back, His acting career down streamed through the 1980s. But came back with vengeance in the 1990s with his impressive portray in Pulp Fiction  released in 1994. Also, able to start in films such as Face/Off in 1997, Swordfish in 2001, Wild Hogs, and Hairspray.

John also nominated for the Academy Award for Best Actor by his performance in Saturday Night Fever and Pulp Fiction. He won his first Golden Globe Award for Best Actor in a Motion Picture and also nominated altogether six times. He received the IIFA Award for Outstanding Achievement in International Cinema in 2010. In 2016 John received his first Primetime Emmy Award as a producer of the American Crime Story. He also received an Emmy nomination and a Golden Globe nomination for his acting of lawyer Robert Shapiro in the series.

John Travolta was the youngest and the brightest among the big family of six children. His father’s name was Salvatore Travolta. He came into this world in November 1912 and died in May. He used to be a semi-professional American football player.  And also used to work as a tire salesman and was the partner of the same tire company. His mother’s name was Helen Cecilia; born on January 18, 1912, and died in December 1978. She was an actress and singer. She had appeared in The Sunshine Sisters which was a radio vocal group, and also has acted and directed before becoming a teacher at high school drama and again an English teacher.

He had five siblings, form which the eldest was Joey, and then came Ellen, Ann, Margaret, and Sam Travolta and the youngest was John. They were all inspired by their mother’s addictive years of theatre and drama and have all seriously acted. His father was a second-generation Italian American and his mother was Irish American. Travolta grew up in an Irish-American neighborhood and has also claimed that he was already living in Irish culture. However, John raised to be a Roman Catholic, but after studying he converted to Scientology in 1975. Travolta went to Dwight Morrow High School but dropped at the age of 17 as a junior in 1971. 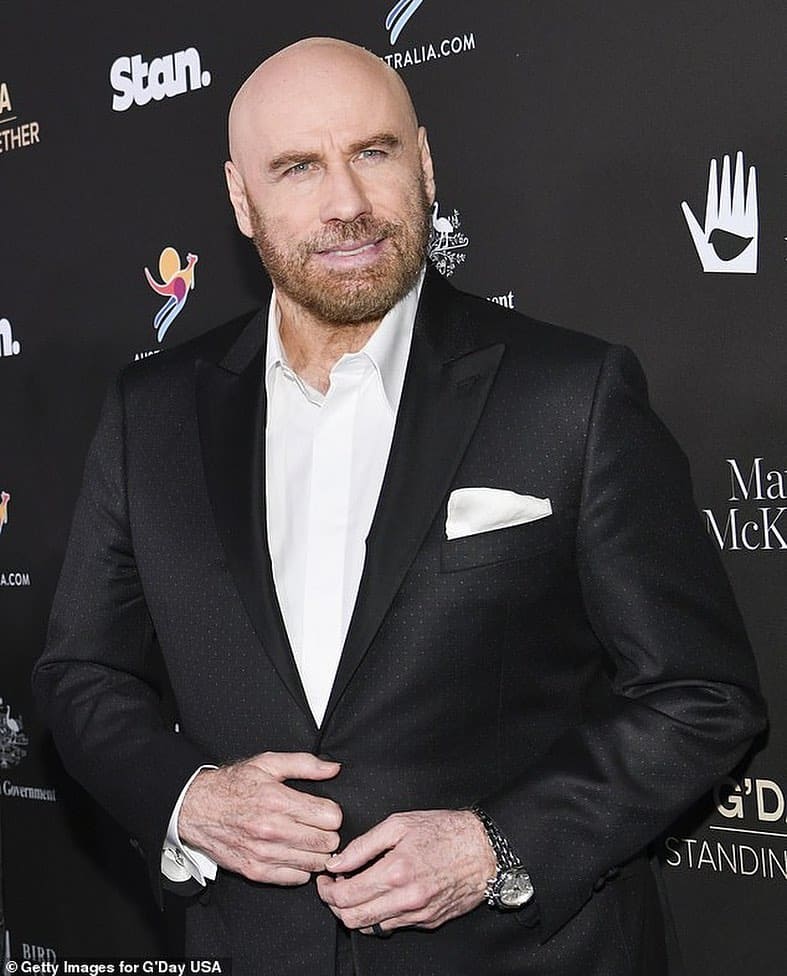 After attending Dwight Morrow High School he dropped out from there as a junior. Later, John transported from the Hudson River to New York City. He already has landed a role in the touring company of the musical Grease and also on Over Here in Broadway. He was singing the Sherman Brothers’ song “Dream Drummin. His first job was singing, he could sing very well. From New York, he moved to Los Angeles for professional reasons.

Travolta’s first screen role in California was a small role of fall victim in Emergency! His first movie role was as Billy Nolan. Billy Nolan was a bully who was addicted to playing a prank on the character Sissy Spacek in the horror flick Carrie which was in 1976. He landed his star-making role as Vinnie Barbarino in the TV sitcom Welcome Back which around the same year. Kotter was a series released in 1975 which aired until 1979 in which his sister, Ellen, also occasionally appeared as character Arnold Horshack’s mother. The show aired on ABC.

His first hit single naming the album “Let Her In”, listed at number 10 on the Billboard Hot one hundred charts in July of 1976. Altogether in the next few years, he portrayed in The Boy in the Plastic Bubble and also portrayed his two most noted screenplays which were Tony Manero in Saturday Night Fever which was in  1977 and Danny Zuko in Grease which was in 1978. These films were placed alongside films that were the most commercially successful pictures of the decade and made Travolta international famous. He got an Academy Award nomination for Best Actor at age 24 for Saturday Night Fever. He is one of the youngest performers ever nominated for the Best Actor Oscar. His mother and his sister Ann played a role very briefly on Saturday Night Fever and his sister Ellen played a waitress in Grease.

Travolta gave many performances of the songs one the Grease’s soundtrack album. A national craze for country music which Travolta entrusted to the people that followed and made his film hit, Urban Cowboy, in which he starred with Debra Winger. However, after playing in Urban Cowboy, Travolta’s career took a halt, when he appeared in massive critical failures films. Travolta then started in many commercials at that time. The critical nightmares he had performed on were “Two of a kind” (1983), “Perfect” (1985). “Staying Alive” which was 1983’s sequel to Saturday Night Fever was also a critical mass, even though the movie grossed over $84 million and became a box-office hit. He, unfortunately, declined few roles he was offered which later turned out to be box-office hits, American Gigolo and An Officer and Gentlemen were those movies, both of whom were later played by Richar Gere.

His next successful movie after “Grease” was “Look Who’s Talking”, Travolta appeared alongside Kristie Alley in the film that grossed $297 million. He later appeared on the sequel of these movies; “Look Who’s Talking” (1990) and “Look Who’s Talking Now” (1993). Even after playing these movies, his career was not revived, he was walking on the thin edge of his career during this time. But it all was about to change with the Quentin Tarantino’s hit film “Pulp Fiction” (1994), in which he played as Vincent Vega, got him his Academy Award nod and blew life to his career once again.

He was shifted to A-list actor yet again after his performance an performed in films “Get Shorty” (1995), an FBI agent and terrorist in 1997’s “Face Off”, “Civil Action”(1998), a presidential candidate in “Primary Colors” (1998) and as a military investigator in “The General’s Daughter” Travolta yet faced another setback and the infamous Razzie award for his production and performance in the movie adaptation of “Battlefield Earth”, which was sadly his dream project. Travolta’s latest films include “Swordfish” (2001), “Ladder 49” (2004), “Be Cool” (2005), “Wild Hogs” (2007), he voiced in Disney’s “The Bolt”.

John Travolta married actress Kelly Preston in 1991 and moved into their newly bought house in Islesboro, Maine. They conceived a son, his name was Jett. Also had a daughter, her name was Ella Bleu and she was born in 2000. They also had a third child in 2010, his name was Benjamin. The couple has regularly have visited marriage counseling. This helps them keep their marriage alive until this date.

In May 1991, Time magazine published a story named “The Thriving Cult of Greed and Power”. In the article, the former church of Scientology’s director William Frank said that “he had a fear that the church would publish detailed information on his private life, which included his homosexual behaviors. Marty Rathbun, a former church official said that she has worked with Travolta’s attorneys much time to work out the allegation about Travolta’s homosexuality and tried to close the lawsuits against the star.

In May of 2012, an unknown person filed a lawsuit against Travolta, which included claiming a sexual assault and a battery. Travolta’s lawyer said that these false accusations are nothing but nonsense and were the case where someone would want to get fame in exchange for doing nothing. His counsel also stated that he could prove his client Travolta was not in California on the day of the miss-happening and that Travolta would sue the attorney and Plaintiff for fake accusations. After that, a second case would join the lawsuit making similar accusations.

In September of 2014, Travolta declined the claims made by his former pilot. The pilot Douglas Gotterba said that “They had a sexual relationship while working together for his aircraft company.

In 2017 there was a criminal complaint against Travolta. This complaint was for sexual battery which took place in 2000.

Travolta’s son Jett passed away at the age of 16. He was on a Christmas vacation in the Bahamas. The Bahamas death certificate claimed that his son died of a seizure. Jett had a history of seizures. He had reportedly suffered from Kawasaki disease at the age of two. Travolta suspected that his son had autism and that is the reason why he suffered regular seizures. He also made his public statements immediately which making testimony after a multimillion-dollar extortion plot against him because of the connection to his son’s death.

After Travolta proved wrong he dropped all his charges and has credited his family and Scientology with helping him persuade his acting career and move on with his son’s death. In the memory of his belated son, Travolta established a non-profit organization such as the Orphan Winfrey Leadership Academy, The institutes for the Achievement of Human Potential and the Simon Wiesenthal Centre.

Travolta’s death was just a piece of fake news caused by Siri’s misleading. Travolta’s son Jett died on January third, 2009. The Business insider contacted as soon as he knew that John Travolta was alive and not dead. The company said that they would fix the issue. Apple CEO Tim Cook has said the time has spoken against the fake news. He said that “The bigger issue is that some of these tools are used to divide people, to manipulate people, to get fake news to people in broad numbers, and so to influence their thinking, changing their minds.” This public statement was given in November.

Kelly Preston was born in October of 1962. She is an American Actress and former model. Kelly has made her entrance in more than 60 television and film shows. Also, she appeared in famous movies like Mischief, Twins and Jerry Maguire. She married to John Travolta and has a collab with Travolta in fiction film Battlefield Earth. She also acted in the film The Cat in the Hat, Old Dogs, and Broken Bridges.

Kelly Kamalelehua Smith was her full name. She took birth in Honolulu in Hawaii. Her mother was an administrator of a mental health care center and her father worked for an agricultural firm. He drowned in the water when Preston was three years old. Her mother then married Peter Palzis who was a personnel director who adopted Preston. Preston used his name when she first started her acting career in 1984. She has a younger half-brother named Chris Palzis.

Before she married Travolta, she had a relationship with George Clooney. In 1990, She briefly engaged with Charlie Sheen. She ended her relationship when Charlie shot her accidentally in her arm.

She met John Travolta while filming The Experts, in 1987. They married in 1991 while traveling to Paris on Air France for a wedding ceremony on 5th September 1991. The first ceremony was considered invalid because it was done by a French Scientology minister. Then the second ceremony took place on September 12 in Daytona Beach, Florida.