Matthew David McConaughey, born on November 4, 1969, is one of the renowned American actor, model, writer, producer, and director. Born in Uvalde, Texas, Matthew McConaughey’s age is 48 years old. The actor gave a breakout role in the comedy, the coming-of-age comedy ”Danzel and Confused” in 1993. Later appearing in slasher films such as “Texas Chainsaw Massacre:The Next Generation” in 1994, the legal thriller “A Time to Kill” in 1996, comedy film “Larger than life” in 1996, Amistad, a Steven Spielberg’s historical drama made in 1997, the science fiction drama “Contact” (1997), comedy “EDtv” (1999), along with the war film “U-571” in 2000.

The best and the most rewarding years in the career of McConaughey were 2013 and 2014. In 2013, McConaughey appeared on the biographical film “Dallas Buyers Club” as a cowboy diagnosed with AIDS, Ron Woodroof.  This role helped him bag the Academy Award, Critic’s Choice Movie Award, Golden Globe Award, and Screen Actors Guild Award. All the Award was for the category of Best Actor. In 2014, he appeared on the first season of HBO’s crime drama anthology series, “True Detective,” as Rust Cohle. For this performance, yet again he won Critic’s Choice Award and TCA award. Also nominated for Primetime Emmy Award, Golden Globe Award, and Screen Actors Guild Award. 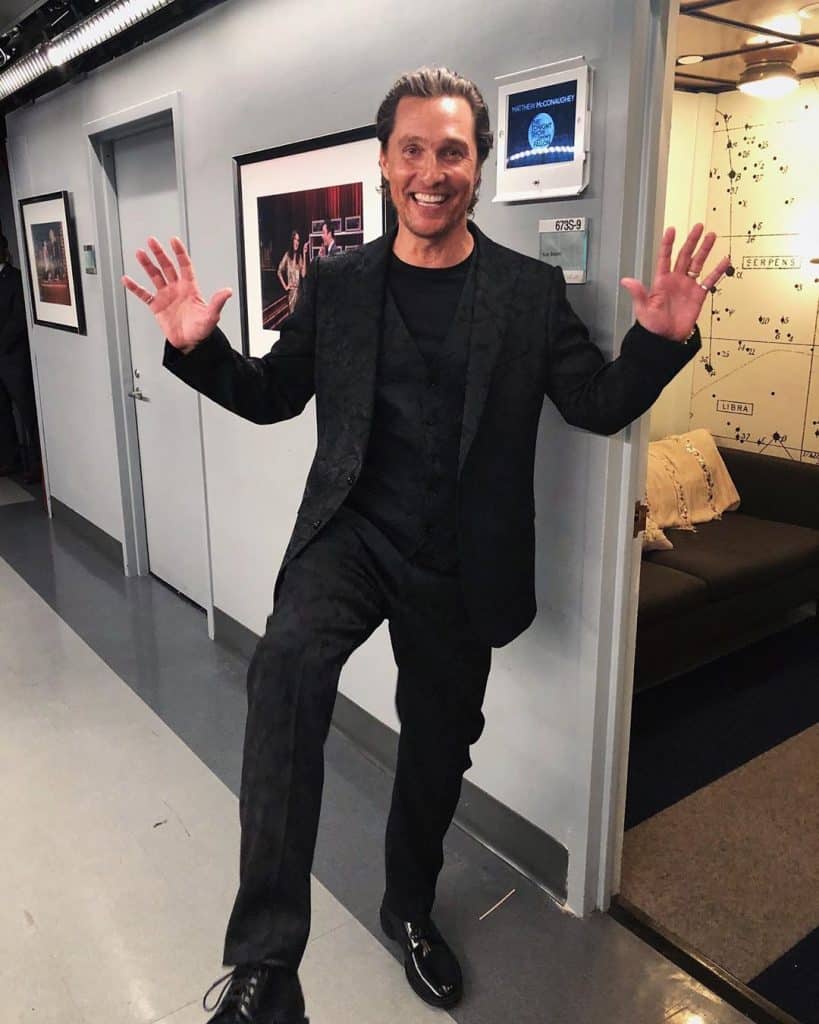 Matthew McConaughey’s total net worth until September 2019 is $95 million.

Matthew David McConaughey was born in the year 1969 on the month of November 4 in Uvalde, Houston, Texas. He was born to mother, Mary Kathleen, and father, James Donald “Jim” McConaughey, an oil pipe supply business owner. McConaughey’s mother and now late father married to each other three times while divorced two times. McConaughey was the youngest of three siblings, Michael and Patrick. His brother Patrick was not born to his parents instead of adopted by the couple. McConaughey’s brother Michael, who is also known by the nickname Rooster, is a self-made millionaire who stars in “West Texas Investors Club,” a CNBC docu-series and even one of the stars in the A&E show “Rooster & Butch” with Wayne (Butch) Gilliam. McConaughey can trace his heritage to English, German, Irish, Scottish, and Swedish. He is also the relative of Dandridge McRae, a famous Confederate brigadier general.

McConaughey attended the Longview High School in 1980, for which he had to move to Longview, Texas. He was a Rotary Exchange Student, so he lived in Warnerville, New South Wales, Australia for a year. He has a degree in Radio-Television-Film in 1993 from the University of Texas at Austin. Although McConaughey planned to study as a lawyer, later, he continued his journey differently.

Matthew McConaughey was acting from as early as 1990, mainly in commercials and small film roles. The big break that the actor was looking for came in 1963 as the film “Dazed and Confused”. His character, the infinitely quotable David Wooderson, defines the role McConaughey as, a comedic performer. Matthew is famous for his good looks and an easy attitude. Thus landed his first lead performing movie in 1996, “A Time to Kill,”. The movie also starred very famous actors like Sandra Bullock, Samuel L Jackson, and Kelvin Spacey. Even though rumors spread about the relation between Bullock and McConaughey, the pair denied the reports.

When Matthew McConaughey appeared on the cover of Vanity Fair, moviegoers assumed him as the next big thing in Hollywood. In 1997, he worked with director Robert Zemeckis on the sci-fi movie “Jodie Foster”. Also involved in Steven Spielberg’s film “Amistad” as a lawyer in the trial of African slaves.

In 1999, McConaughey returned to his acting roots, as a comedy actor in EdTV as a lowly clerk. Later, he became the star of his own reality show. But unfortunately was a critical and commercial disappointment. This looked to have affected the actor.

Matthew McConaughey later became the king of romantic comedies as he starred in “The Wedding Planner” in 2001. Later he appeared on another romantic comedy, “Lose a guy In 20 Days” in 2003 opposite Kate Hudson. He tried entering into the action genre with 2003’s “Sahara” and found love with the co-star Penelope Cruz. The couple romantically involved for years to come. Matthew, working alongside Al Pacino, played as a con man in the 2005’s dramatic thriller “Two for the Money,”. While the movies he appeared in didn’t make any significant mark in the box-office, but McConaughey remained popular. He established himself as a heartthrob and later named “The Sexiest Man Alive”.

In 2006, McConaughey returned to the comedy genre with a role in the comedy “Failure to Launch”, in which he had the opportunity to re-team with Sarah Jessica Parker. In 2008’s romantic comedy “Fool’s Gold,” he again teamed up with Sarah Jessica. McConaughey announced his girlfriend was pregnant and he was going to be a father on his website. Matthew McConaughey and heartthrob Camila Alves welcomed a baby boy and named Levi Alves McConaughey on July 7, 2008. McConaughey appeared in the 2008 comedy Tropic Thunder on the star-studded lineups on the likes of Ben Stiller, Jack Black, Robert Downey Jr., he took the role of Owen Wilson in this film. In 2009, he starred alongside Jennifer Garner and Michael Douglas on “Ghosts of Girlfriends”. Matthew McConaughey took a yearlong break in 2010.

He returned from the break as Mick Haller in the 2011’s “The Lincoln Lawyer,” and as Killer Joe Cooper in another 2011’s film “Killer Joe”. These movies were followed by the drama “Mud” in 2012. This film earned him some commercial and critical acclaim for his performance. He bagged some more commercial approval for his part in the comedic movie “Magic Mike,” where he played as a male stripper, Dallas, who mentors a younger performing skipper as Magic Mike. He also cast on a small on-screen character in the film “Wolf of Wall Street”.

McConaughey performed as Ro Woodruff, the real-life 1980’s cowboy activist, who after been given a time period of six months to live began advocating and mitigating the disease’s effect and taking a regime of drugs, “The Dallas Buyers Club” in 2013, The film for which McConaughey had to lose 47 pounds to portray his character. For his performance, he won the 2014 Academy Awards and Golden Globes award for the best actor. Still smelling the previous success of Oscars and motivated by it, McConaughey both starred in and executive produced the 2014 HBO series “True Detective”. He took the complex role of Rust Cohle which was dark and philosophical, gave McConaughey a whole new genre of performance, and also the effort got him nominated for an Emmy as well as getting him named as the Times magazine’s list of 100 most Influential People in the World.

Christopher Nolan’s sci-fi epic movie, “Interstellar,” is another critically acclaimed and a huge blockbuster film that McConaughey appeared. The actor performed as an astronaut on a mission to seek a new home for mankind and his family to live in as the Earth becomes more and more hostile to survive on. McConaughey starred opposite to actress Naomi Watts in 2015 for the Gus Van Sant drama “The Sea of Trees.” And in 2016, he gave life to the Confederate army deserter Newton Knight, in the real-life inspired “Free State of Jones.” He has also voiced some characters, most notably voicing the character Beetle in the animated movie Kubo and Two Strings.

McConaughey’s new upcoming movie is The Gentlemen. The movies seem to be released on January 24, 2020. This is a British American thriller movie.  Guy Ritchie has directed the movie and also has written the screenplay.

McConaughey is also a very charitable and helping person. The actor has recently started a foundation. The foundation of McConaughey’s “Just Keep Living” is stated to “dedicated to helping teenage kids live active lives and make healthy choices to become great men and women”. He has also received the Creative Conscience award from unite5: humanity for his outstanding work with his foundation on 2016, February 25. Matthew McConaughey is also an avid animal life helper, helping to rescue stranded pets after Hurricane Katrina caused the flooding of New Orleans. in 2006, he once managed to rescue an innocent cat in Sharman Oaks, from two youths.

McConaughey is also involved in teaching, as he teaches at his alma mater, UT-Austin, in which the first session was about the filming of the 2016 film “Free State of Jones,”. He teamed up with university lecturer Scott Rice and the director of The Hunger Games, Gary Ross, for the second session. The college course which is the part of the Moody College of Communications is open to all the juniors and seniors, and the most crucial part is that there are no prerequisites or fees to take this free weekly course.

Matthew McConaughey is one of the most talented and successful actors in the industry who has won one Oscar and has the other 46 wins and has other 79 nominations. He is also a talented producer and director and also the source of motivation for many people around the globe. Countless people have enjoyed his films all over the world, and they all love him.

He’s also a source of inspiration for many volunteers for his selfless volunteering acts. The actor stated himself selfish, also the actor stated I’m a fan of the word selfish. Self. Ish. When I say I have gotten a lot more self-ish, I mean I am less concerned with what people think of me. I’m not worried about how I’m perceived. Selfish has always gotten a bad rap. You should do it for you.”

Besides being a commercial endorser, McConaughey has also been a spokesperson for famous brands like Dolce & Gabbana and Wild Turkey and also to the Lincoln Motor Company, which has been a matter of parody and hs been parodied by the likes of Saturday Night Live, Conan O’Brien and Ellen DeGeneres is the Ellen DeGeneres Show.