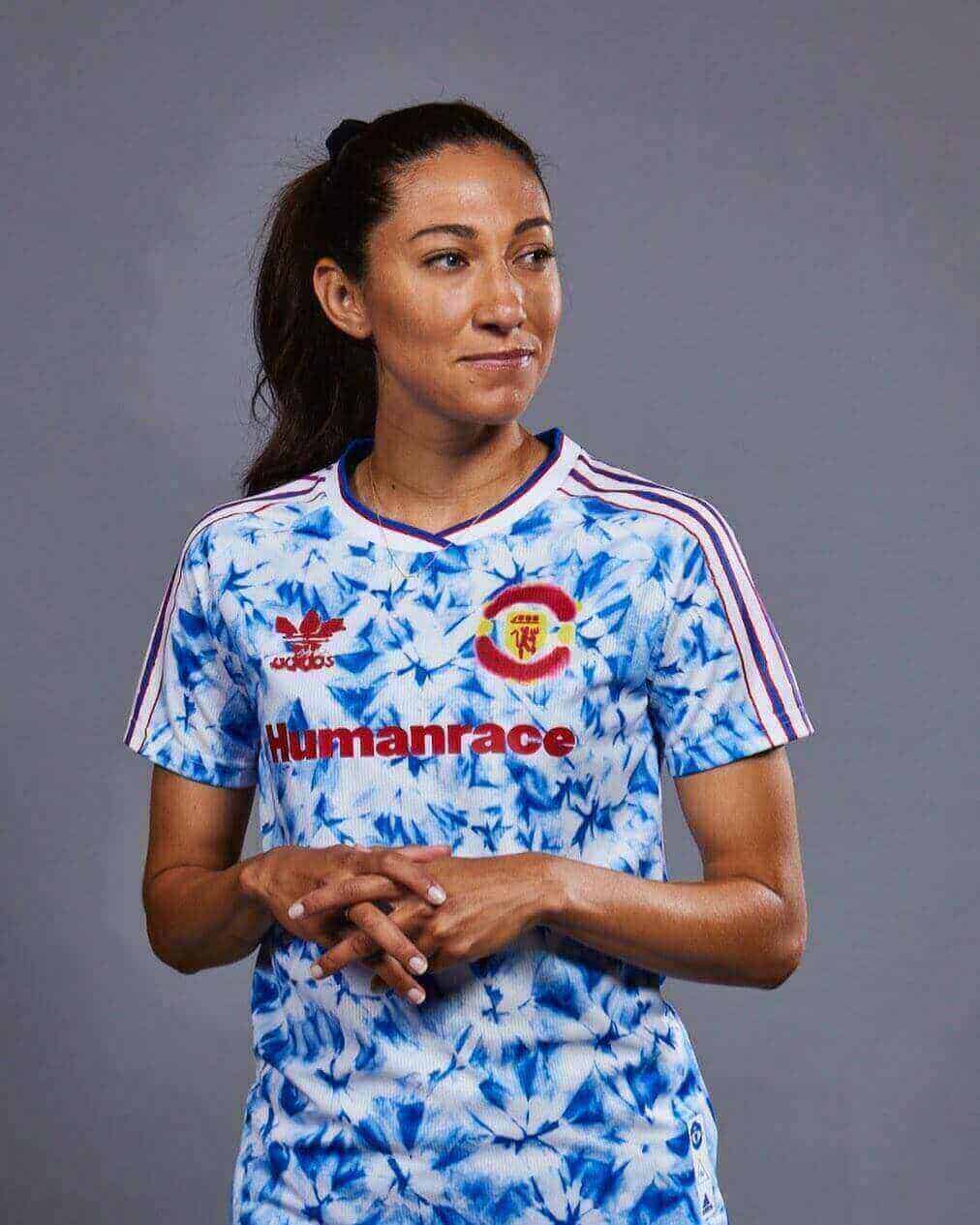 Christen Annemarie Press is a professional American football player. She was born to her father, Cody Press, and mother, Stacy Press, on December 29, 1988, in Los Angeles, California, United States. She is currently playing in English F.A. Women’s Super League club Manchester United as a Forward and the United States national team.

Christen Press stands 5 ft 7 in (1.7 m) tall with a fabulous body with a weight of 57 kg. She has a white skin tone with green eyes and black hair.

Christen Press was raised in the suburb of Palos Verdes Estates along with her two sisters, Channing and Tyler. Her parent was both professional player. Her father was an American football player, and her mother was a tennis player. Due to her parents being involved in sports, she was also influenced at an early age. She started to play football at the age of five.

Christen Press joined the Chadwick School for high school, and she joined the football team. she became captain for two years in her 4-year high school soccer team. She helped her team for two Southern Section Division IV titles, and she was also given NSCAA High School All-American and Parade Magazine All-American. Christen Press played for Slammers F.C. in U.S. Youth Soccer Association’s national championship tournament. She has also won the golden boot for most goals.

Although her football career had already started at a very young age, she played in various junior leagues and clubs.

Press stared in 18 games from Stanford in her freshman, where she scored eight goals, six assists, 22 points, and 60 shots. She became highlighted when she scored the goal in the 37th second of the match, which was the fasted goal in the NCAA College Cup history.

In 2010 press was the nation’s top college soccer player and was awarded the 2010 Hermann Trophy. Stanford lost the league in the final and became the runner-up finish.

Christen Press was picked in the 2011 WPS Draft by  Washington Freedom. Later on, Washington Freedom was sold, and Under new ownership, it was named MagicJack. She played for a single season and appeared in 17 games and scored eight goals. Press scored a hat trick during the match against the Boston Breakers. This was her first hat trick in her professional club career. Christen signed with Atlanta Beat in the offseason, but the league got canceled.

In 2012 Christen Press joined Kopparbergs/Göteborg FC to play in Damallsvenskan, the top division league in Sweden. She appeared in 21 games and scored 17 goals. Christen Press scored two goals against  Kristianstad and won the quarterfinals game by 3-0. Again in the semifinals, she scored a goal and helped the team to win the match. Kopparbergs/Göteborg FC won the league by defeating Tyresö FF by a score of 2–1.

Christen Press became the first American to score 23 goals in the history of the Damallsvenskan. Tyreso ended in the second position but got qualified for the 2014–15 UEFA Women’s Champions League. Christen Press helped the team reach the final 2014–15 UEFA Women’s Champions League but lost the game against  VfL Wolfsburg by 4-3.

Christen Press joined the Chicago Red Stars for the 2014 season. She appeared in 60 games and scored 35 goals, and she played in 12 matches and won the team’s, Golden Boot. Christen Press helped the team in the game against the  Portland Thorns F.C. at Providence Park by scoring two goals. In the match against  Western New York Flash on August 16, she scored two goals: a draw match. Chicago became fifth in the season.

She played for the 2015 season from Chicago red star, and she became the NWSL player of the month in April. Christen had to miss the eight-game because they had to play the 2015 FIFA Women’s World Cup.

In the 2016 season, she became the captain of the club. She played 14 games and scored eight goals. But Chicago got eliminated after losing Washington Spirit in extra time by 2-1.

Again she became captain of Chicago in the 2017 season. In that season, Chicago finished in fourth place by losing the game against  North Carolina Courage by 1-0. But Press became the  NWSL Best XI at the end of the season.

In January 2018, Christen was traded to the Houston Dash, but later, dash did not join the club.

Christen Press joined the Kopparbergs/Göteborg FC for three contracts. She played eight games and scored four goals. In April, she became Damallsvenskan Player of the Month.

Christen Press joined Utah on 2018, June 18, and did her debut on June 27 against Seattle’s reign, which ended in a draw (0-0). She played in 11 games and scored two goals. Utah Royal FC ended in fifth place.

In the 2019 season, she started her game by assisting Lo’eauLaBonta’s goal against Washington Spirit and won by 1-0. She became a player of the month for April. She missed 11 games in the season because she was part of the 2019 Women’s World Cup team. she became NWSL Best XI in the 2019 season.

Christen Press joined Manchester on September 9, 2020, and played her debut game as a 77th-minute substitute on October 4 against Brighton & Hove Albion and won by 3-0.

Christen Press has not only been active in the national game, but she has also been playing international matches in the football industry. She has played matches against many countries all over the world.

The United States under-23

Christen Press got selected for the United States under 23 teams and played in six-game and scored four goals.

Christen Press got selected for the united states national team and played her debut game on February 9, 2013, in a friendly match against Scotland. She scored two goals and gave an assist, and won the game by 4-1. Press became Budweiser Woman of the Match. Christen scored the goal against china in the 2013 Algarve cup and won the match by 5-0. United States national team to win the 2013 Algarve Cup by defeating Germany by 2-0. She played 12 games and scored eight goals in her first year of the senior team.

Christen Press got selected for the 2015 world cup and played four games out of 7 games. She debuts her world game against Australia and also scored a goal. The United States defeated Japan in the final by 5-2 and won the 2015 World cup.

Christen Press got selected for the 2016 summer Olympics. She played all 25 games and scored 12 goals. But the United States lost the Olympics in the quarterfinal against Sweden in a tiebreaker. Her supporter started the #DogsforChristen hashtag to cheer up, and it was tending on tweeter.

Christen Press is among the three players to play in all games in the 2017 Tournament of Nations. In June, she scored a goal against Norway, which was also the winning goal. They won by 1-0. Press completed the tournament with three-goal and three assists.

Christen Press got selected for the 2018 CONCACAF Women’s Championship, and the United States Women’s National Team won the championship.

Christen Press got selected for the 2019 FIFA women’s world cup, her second time in the world cup. She played all three group stage games. Press scored a goal against England. The United States won the world cup by defeating the Netherlands by 2-0. This was the second consecutive World Cup of the united states Women’s National Team. she appeared in all 24 games and scored five goals with 12 assists.

Christen Press scored her 50th international goal in the friendly game against Sweden and became the 12th player in history to reach such a milestone.

Christen Press got selected in the 2020 CONCACAF Olympic Qualifying tournament for the second time. She scored two-goal against Costa Rica and a goal against Mexico in the semifinals. The United States won the match, and Golden Ball awarded Christen as the tournament’s best player.

Christen Press has received many achievements in her football career. She was featured in the E.A. Sports’ FIFA video game series in FIFA 16 and her national team, which was the first time in the history of FIFA game to feature women players. FOX Sports announced Press as a host in October 2015.

Some of her honors are listed below:

Some of her club honors are listed below:

Christen Press has worked with Nike in advertisements and promotional videos. She became a brand ambassador in February 2016 for nutritional product manufacturer Genesis Today. Christen worked in Wheaties promo video. She had played in various short movies and commercial ads.

Christen Press is actively involved in social media like Facebook, Instagram, and Twitter, and she regularly updates her profile. She has a good number of fans and admirers over the social media landscape. Her Instagram username is @christenpress, having a total of 757k followers. She has made over 1295 posts. You can also tweet her. She has around 544k followers, and her username is @christenpress. The official Facebook page of Christen Press is @ChristenPress23, having 342k followers and 171k Facebook likes.

Christen Press is a national team player and one of the leading players of her club. She must be earning a good paycheck. According to some online blogs, her salary is $36,000, and her net worth is approx$1.4 million. Her primary income is football, but she has an endorsement with the brand and other companies.

Christen Press is unmarried, and she is currently dating Tobin Heath.

Some Facts About Christen Press