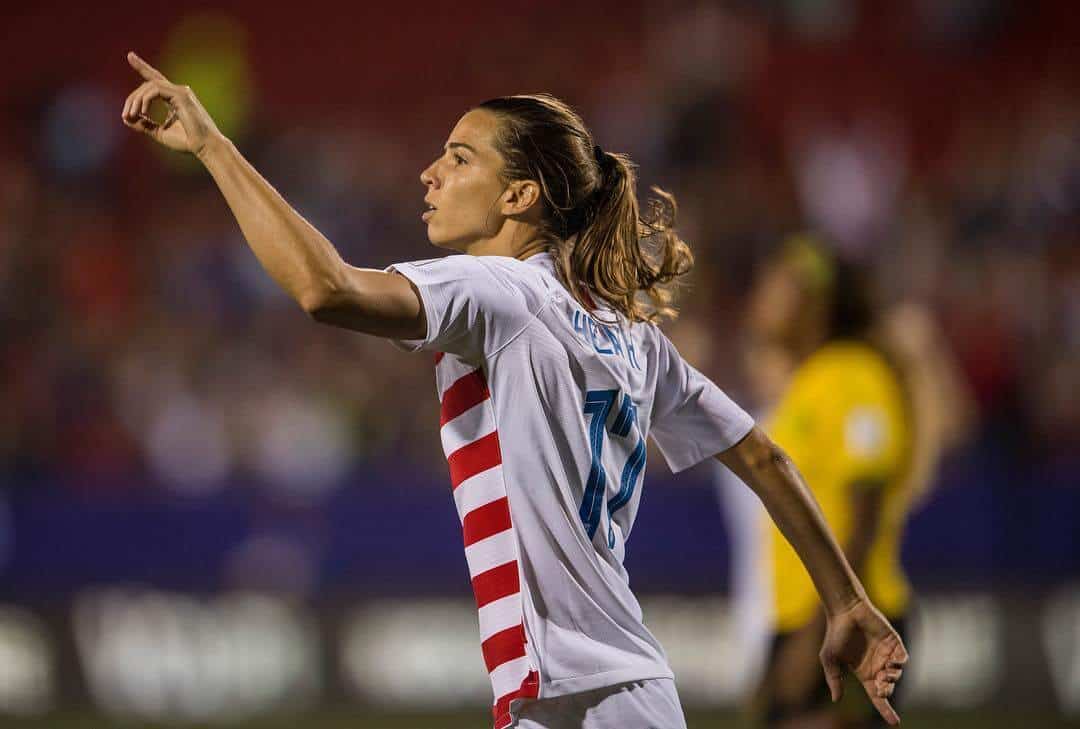 Tobin Powell Heath is a professional American football player. She is currently playing in English F.A. Women’s Super League club Manchester United as a Forward and the United States national team. Tobin is best known for her overall achievements and contributions to the world of professional soccer.

Tobin Heath stands 5 ft 6 in (1.68 m) tall with a fabulous body with a weight of 59 kg. She has a white skin tone with green eyes and dark brown hair. Plump lips, toned physique, downward pointed nose, and u-shaped jawline distinguish her.

Tobin Heath was born to his father, Jeff Heath, and his mother, Cindy Heath, on 29 May 1988, in Morriston, New Jersey, United States. She was raised with her older sisters Perry Heath, Katie Heath, and a younger brother Jeffrey heath in Basking Ridge, New Jersey. Both of her older sisters are athletes in action and champions for Christ.  Tobin started playing soccer at the young age of four.

Tobin Heath has been playing football since a young age. She has received many honors and has achieved her goals in her junior and senior years.

Tobin Heath attended high school at Ridge High School, situated in Basking Ridge. In high school, Tobin played football for three years. She played for the Club National Champion PDA Wildcats team in 2003. Tobin was named to the 2005 Parade Magazine All-America team and was ranked as No. 2 recruit in 2006 by Soccer Buzz Magazine. Heath graduated from High School in 2006.

Tobin Heath attended the University of North Carolina after she completed high school. In her senior year, she did not play soccer; instead, she decided to train boys. As a freshman in junior year, she made 23 appearances, scored four goals with nine assists, and was part of the 2006 All-America national championship team. She also helped the UNC to win the NCAA title. In her sophomore year, Tobin Heath was named to the First-Team All-ACC and First-Team NSCAA All-American.

From the year 2004 to 2006, Tobin Heath played with New Jersey Wildcats, also known as PSA Wildcats. She helped the team to win the 2005 USL W-League Championship. In the next year, she played for Hudson Valley Quickstrike Lady Blues. The team made it to the 2007 Conference Semifinal. In 2009, Tobin played one season with Pali Blues.

In 2010, Tobin Heath was the first pick in the 2010 Women’s Professional Soccer college draft. Atlanta Beat also selected her, and she made her third appearance for the club. After suffering from an injury, she missed other matches of the season in 2010.

On 10 December 2010, Tobin Heath and her teammates Angie Kerr and Eniola Aluko were traded to Sky Blue F.C. They were sold in return for the 4th and 8th pick in the 2011 WPS Draft. In the starting three games, Tobin made 12 appearances for the Sky Blue F.C.

Tobin Heath joined the club New York Fury of the Women’s Premium Soccer League Elite after the folding of WPS in 2012. She recovered from the ankle injury, played only one match with New York Fury, and was later called for the national team.

In 2013, Tobin Heath signed a six-month contract with Paris Saint-Germain until the end of May 2013. She made a total of 12 appearances and scored five goals for the club. Then she played for Portland Thorns. Heath returned to Paris Saint-Germain F.C. from September 2013 to June 2014. During the 2013 National Women’s Soccer League Championship, Tobin has a sore right foot.

On 11 January 2013, the National Women’s Soccer League announced Tobin Heath as one of seven players for an initial roster of NWSL Player Allocation. The Portland Thorns won the 2013 NWSL Championship league against Western New York Flash with the Heath-winning goal from a direct free-kick. She was voted as Most Valuable Player in the same game.

At the beginning of the 2016 NWSL season, Tobin Heath assisted in five games and earned NWSL Player of the Month for April. She scored her first goal of the season against Washington Spirit and was named NWSL Player of the week for week 6. When Christine Sinclair was injured, Tobin was named the team’s captain for the season. Because of injury, Tobin missed the majority of the 2017 National Women’s Soccer League season. In May 2017, it was announced that Tobin Heath would take up the role of Youth Technical Director. She returned at the end of the season in the match against Orlando Pride.

As she was injured in the 2017 NWSL Championship game, she underwent surgery at the beginning of 2018. She returned to Portland Thorns in the match against Utah Royals on 28 April. Heath was named as 2018 NWSL Best XI and NWSL Team of the Month for August. She won the NWSL Goal of the Week and NWSL Player of the Week at the starting of the 2019 season. But disrupted by the COVID-19 pandemic situation, Tobin Heath chose not to participate in the 2020 NWSL Challenge Cup.

On 9 September 2020, it was announced that Heath signed an a-year contract with Manchester United and her national teammate and a professional soccer player, Christen Press. She made her first debut on 4 October 2020 as a 70th-minute substitute player in the victory against Brighton & Hove Albion.

Tobin Heath has not only been active in the national game, but she has also been playing international matches in the football industry. She has played matches against many countries all over the world.

Tobin Heath played on many youth national teams, including U-16 and U-17. She was outstanding at the 2006 FIFA U-20 Women’s World Championship. Tobin made a total of 24 appearances for the 2006 USA Women’s U-20 National Team U-20. She was also part of the USA Women’s team who won a silver medal at the 2007 Pan American Games.

On 18 January 2008, Tobin Heath made her first appearance for the senior national team in Four Nations Tournament in China against Finland. At the early age of 20, she was named U.S. roster for Summer Olympics 2008. Her first international goal was in the 2008 Algarve Cup against China.

Tobin Heath earned caps for the USWNT in 2009 and was named 2009 U.S. Soccer Young Female Athlete of the Year. Because of an ankle injury and illness, she could not play for the United States in the 2010 season.

At the age of 23, Tobin Heath made her first debut in FIFA Women’s World Cup in 2011 held in Germany. She made four appearances during the 2011 FIFA World Cup.

Tobin Heath was a member of the 2012 U.S. Olympic team, and she played in all six matches. She assists in three games during the tournament. The first one was against France, the second one was against Columbia, and the third one was in the quarter-final match against New Zealand.

In the 2016 Olympic qualifying match, Tobin Heath scored two goals, which helped the United States to qualify for the 2016 Summer Olympics. She participated in her third Olympic Games, appeared in three matches, and recorded two assists. In the quarter-final match against Sweden, the U.S. team was eliminated. Tobin Heath was named NWSL Olympic Player of the Match. After receiving 40% of the vote, she was named 2016 U.S. Soccer Female Player of the Year.

Tobin Heath appeared in all three matches at the 2017 SheBelieves Cup. Because of an ankle injury and back pain, she made only one appearance for the United States in the season 2017.

After ankle surgery, Tobin Heath returned to the field in a friendly match against China on 12 June 2018. She scored in the game against Brazil, which helped the U.S. to win the 2018 Tournaments of Nations. Tobin scored four goals at the 2018 CONCACAF Women’s Championship, two goals against Jamaica. She was also named to the Best XI FOR CONCACAF Women’s Championship. Heath finished the 2018 season with seven goals and six assists, only appearing in 10 games.

Tobin Heath has received many achievements in her football career. She was also honored during her career. Besides receiving many awards, Tobin has been named for many titles.

Some of her honors are listed below:

Some of her college honors are listed below:

Some of her club honors are listed below:

Tobin Heath is actively involved in social media like Facebook, Instagram, and Twitter, and she regularly updates her profile. She has a good number of fans and admirers over the social media landscape. Her Instagram username is @tobinheath, having a total of 784k followers. She has made over 700 posts. You can also tweet her. She has around 509.8k followers with 2k tweets, and her username is @TobinHeath. The official Facebook page of Tobin Heath is @TobinHeathOfficial, having 175k followers and 105k Facebook likes.

Net worth and Salary

Tobin Heath is a national team player and one of the leading players of her club. She must be earning a good paycheck. According to some online blogs, her salary is $278,000-$565,000, and the net worth is approx $1.5 million. Her primary income is football, but she has an endorsement with the brand and other companies. She has endorsed brands such as Six Star Pro Nutrition, Procter & Gamble, and Glukos.

Tobin Heath is unmarried, and she is currently dating Christen Press.

Some Facts about Tobin Heath