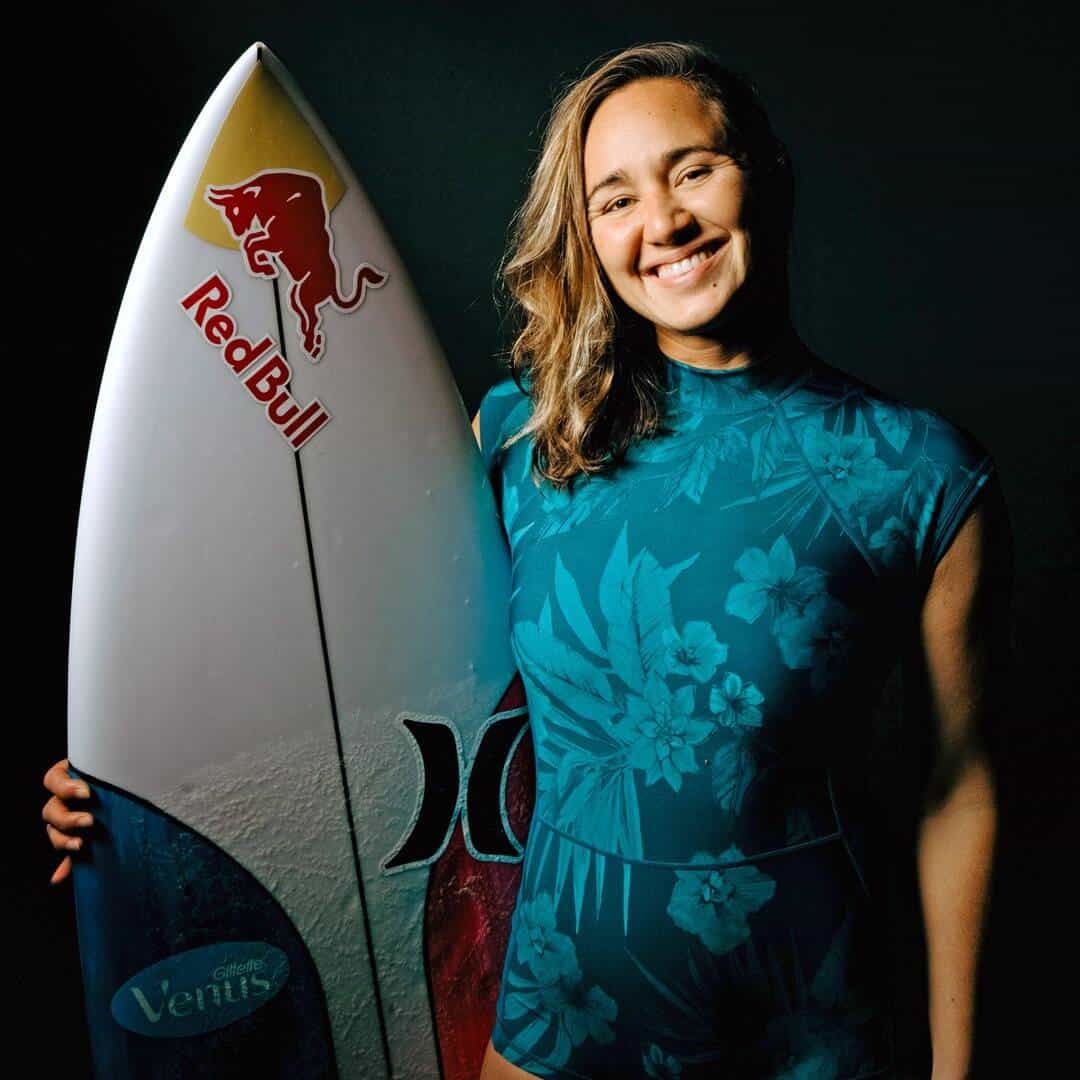 Carissa Kainani Moore is an American professional surfer who was born on August 27, 1992, in Honolulu, Hawaii. She is the 2020 Summer Olympics gold medalist and 2011, 2013, 2015, 2019, and 2021 World Surfing League (WSL) women’s world tour championship winner. Moore surpassed South African swimmer Bianca Buitendag to become the first woman to claim an Olympic swimming gold medal in Tokyo 2020. She has been crowned the World Surfing Champion four times. Glamour Magazine featured  Moore as one of its “Women of the year” in 2013. She got inducted into the Surfer’s Hall of Fame in 2014.

Carissa Moore has been surfing since she was four years old and began competing at the age of eight. Her parents’ names are Christopher “Chris” Moore and Carol Lum. She has a younger sister named Cayla Moore. Moore grew up surfing in Hawaii where she learned how to surf from her dad who used to take her out every day. “Dad taught me how to surf when I was about four or five years old at Waikiki Beach and I was immediately hooked” said Moore.

Her father, Chris, was a competitive open-water swimmer who won several races. He lived closer to the water than Moore’s  mother, so Moore chose Hawaii, the ocean, and her father after her parents divorced when Moore was ten years old. As long as Moore was staying at home with her mom, her motivation to surf waxed and waned depending upon whether or not she had gotten any mail from her dad.

In 2010, Moore became eligible for competition on the World Surfing Association’s (WSL) Championship Tour after winning two events during her rookie season. She ended up finishing third overall and earned the title of “Rookie of the Year.” In addition to winning two titles at the event, Moore had another impressive performance during the final round when she beat reigning champion Stephanie Gilmore by one stroke for an unexpected win. She was the youngest woman ever to win a surfing world championship when she won her first event at age 18.

Moore has been named “Adventurer of the Year” by National Geographic Magazine, “Woman of the Year” by Glamour Magazine, and “Top Female Surfer ”in SURFING Magazine poll numerous times. She became an official member of the Surfer’s Hall of Fame, and her state, State of Hawaii, declared January 4th to be Carissa Moore day.

Carissa has been putting out some impressive media appearances, including numerous web edits and segments. She also appeared in a documentary called Riss, which focused on body image issues. She hopes her story will encourage people who feel like they don’t belong anywhere else.

“I want to leave a message that I love surfing, and I get to do what I love, but I’ve also gone through a lot of challenges,” Carissa says. “I want to empower women to believe in themselves and do what they love.”

In recent years, Carissa started a charitable organization called Surf For Hope which provides surf lessons for girls and young women who might not otherwise be able to afford it.  “We’re starting with a small mentorship program at home. The goal is to give back and encourage them to be strong, beautiful, confident young women – and also to give back in turn,” she explains. “Eventually, we hope to do it on a bigger scale, like an exchange program with girls coming from all over. I think that’s how you can really make the world better by sharing your stories.”

Carissa has more 528k followers on Instagram and almost 49k followers on Twitter. Her Instagram account features photos of her surfing, along with pictures of her dogs, family life, and travels. On social media, she posts about her charity work and encourages others to follow suit. She is also active in her own website, carisamoore.com, where she shares inspirational quotes, videos, and articles. When she finds herself with any free time outside of surfing and helping others, Carissa loves scrapbooking, chilling with her two dogs, snacking on sweet foods and keeping the world up to date with her adventures on her website and blog.