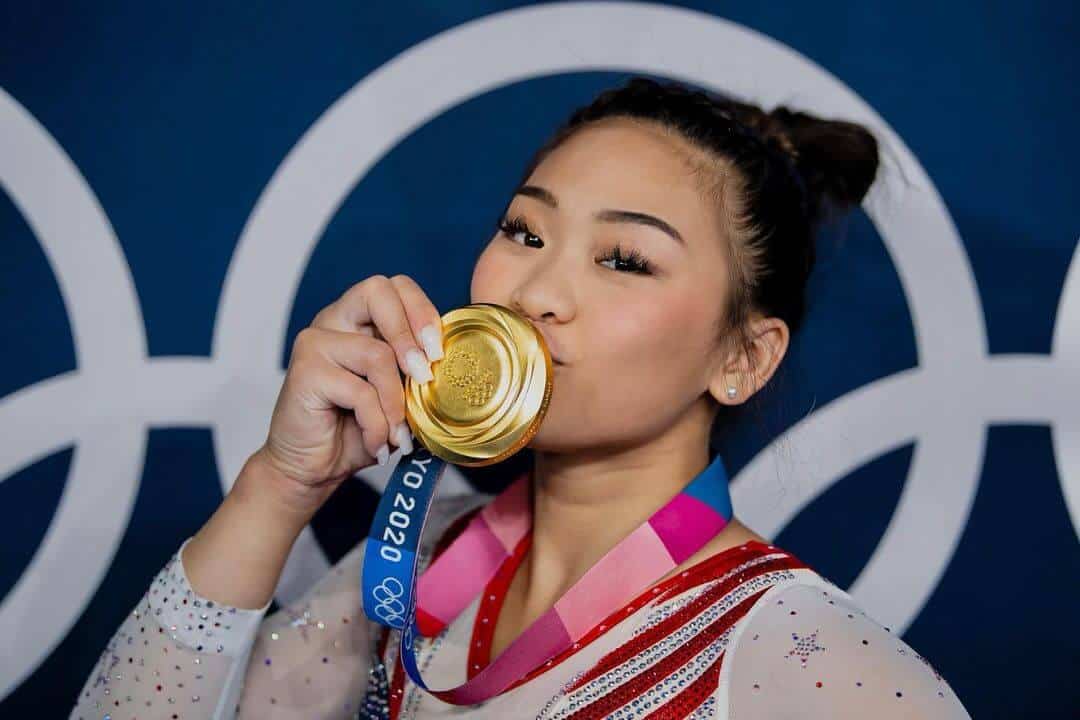 Sunisa Lee or “Suni” is an American artistic gymnast. Lee has competed in several competitions. She is an all-around champion and bronze medalist in the uneven bars event in the 2020 Summer Olympics. Further, she was in a team that won gold at the 2019 World Championships and silver at the 2020 Olympic Games. Likewise, Lee is the first Hmong-American Olympian and has competed six times for the US women’s national gymnastics team.

Moreover, Lee has won altogether 6 world championship and Olympic medals until the age. She is the ninth most decorated American female gymnast along with Gabby Douglas, Kim Zmeskal, Kyla Ross, and Rebecca Bross.

Sunisa Lee is a talented gymnast and an athlete, and most of her income comes from her professional career. As per some sources, her estimated net worth is around $2 million USD in 2021.

Lee is currently single and not dating anyone as of now. Also, there is no information about her previous relationships.

Sunisa Lee was born on 9th March 2003 in Saint Paul, Minnesota, United States. Her mother, Yeev Thoj is a healthcare worker and immigrated to the US as a refugee from Laos when she was a child. Lee was brought up by John Lee, her mother’s partner, from the age of two years. Her mother met John Lee in 2005, who was in the US navy. She grew up in St. Paul along with three half-siblings, Evionn, Lucky, and Noah. John has two other children from his earlier relationship and their name is Jonah and Sheyenne. In addition, Evionn also participated in artistic gymnastics at a regional level.

Lee began gymnastics at six in the Midwest Gymnastics Center, in a St. Paul suburb at Little Canada, Minnesota, and continues to train there in current days. After one year of training, she started to compete and won all-around at a state meet. Furthermore, Lee moved three levels up at eight and qualified for the elite at eleven years.

Likewise, Lee has completed early schooling at South Saint Paul Secondary School in St. Paul, Minnesota. Later, she got into Auburn university and pursuing her graduation. She used to practice in the yard, where her father built a four feet long structure from a spare mattress. Also, John taught her to do flips on the bed.

Similarly, some days before Lee was competing in her first senior USA Gymnastics National Championships in August 2019, her father fell out of a tree and left him paralyzed. After a year, her aunt and uncle died from Covid-19. Also, she suffered from a broken foot.

Sunisa Lee has an attractive and charming personality. She is 18 years now and stands at a height of 5 feet 0 inches (1.52 m) tall. She weighs around 50 kg and her body measurement is approximately 34-25-36. And, she has beautiful black hair and a pair of black-color eyes.

In 2015, Lee won the women’s junior Olympic at the level 10 national championship in Iowa. She participated in the Hopes division in Chicago and became a junior elite in the following year. And she debuted as junior elite for the 2016 secret US Classic in Hartford. After that in 2017, she joined the junior national team, where she made her international debut for the Gymnix International Junior Cup. Lee won the silver medal on uneven bars and her team won the gold medal for the team event.

Moreover, Lee declared her commitment towards Auburn University on a gymnastics scholarship in May 2017.

Similarly in 2018, she joined the team to compete in the Pacific Rim Gymnastics Championships. In this competition, the US won the gold medal for the team and Lee won the silver medal on balance beam, vault, and floor exercise. Then, she finished 4th in the all-around.

In the next month, Lee withdrew from the pan American Junior Championships in Buenos Aires, Argentina due to an ankle injury. Later, she participated in the 2018 US Classic on 28th July and ended in the fifth position for all-around. She won gold for beam balance without doing a dismount.

Additionally, Lee competed in the 2018 US National Championships in August, which happened in Boston. Lee joined the team with Leanne Wong, Jordan Bowers, and Kayla DiCello as one of the favorites for the junior national title. She bagged the bronze medal for the all-around and the gold medal for uneven bars.

Lee started her senior career by competing at the 2019 City of Jesolo Trophy, where she bagged gold in the all-around and helped the US to win the gold medal for the team in the final. Moreover, she won the gold medal on the floor and bars, along with the bronze medal on the beam coming behind the reigning World Champion Liu Tingting from China and her teammate Emma Malabuyo.

After a month, she suffered from an ankle injury, whereas in June Lee has to go through a hairline fracture in her left tibia while practicing a balance beam dismount. Despite her injuries, Lee participated at the American Classic on bars and beams later that month. She finished at second on beam and fall off twice before coming in the fifth position on bars.

Later, Lee was on the list of eight athletes for the team to compete in the Pan American Games with Skye Blakely, Aleah Finnegan, Shilese Jones, Kara Eaker, Morgan Hurd, Leanne Wong, and Riley McCusker.

In the 2019 GK US Classic, Lee finished at second place on bars and tied for the eighth position on the beam. However, she failed to be listed in the team for the Pan American Games.

Moreover, Lee competed in all four events on the first day of the 2019 US National Championship. She came second in the all-around behind Simone Biles and won first place on uneven bars. On the second day, she continued performing and bagged a silver medal for the all-around coming behind Biles. At the same time, she secured the gold on bars leaving behind Morgan Hurd and Biles, fourth on beam and won the bronze medal for the floor behind Biles and Jade Carey. With this success, she was listed as a member of the national team.

In the time of World Championship qualification, Lee helped the US to place first for the team, leaving behind China with over five points. Talking about her individual performance, Lee secured second place in the all-around final behind Biles. And she came second, next to Biles, in the floor exercise, knocking out her teammate Carey in a tiebreaker. Also, she won a bronze medal in uneven bars, next to the reigning World Champions Nina Derwael of Belgium and 2015 World Champion Daria Spiridonova of Russia. However, Lee was excluded from the balance beam due to the two-per-country rule, as Biles and Eaker had already qualified in higher positions.

In addition, Lee competed for uneven bars, floor exercises, and balance beams in the team final of the championship. She helped the US to win the gold medal leaving behind Russia and Italy. Though she could not make out on the balance beam, she scored third highest on uneven bars (14.733) and on floor exercise (14.233). However, she fell from the uneven bars and finished in the eight positions in the all-around finals. Later in the final of the uneven bar, Lee scored 14.800 by performing a clean routine and won the bronze next to Derwael and Becky Downie. And she won silver behind Biles on the floor the next day.

Lee was said to participate at the Stuttgart World Cup in March but was canceled because of the Covid-19 pandemic in Germany. In the meantime, she has to spend two months recovering from a broken bone in her left foot and two months for an Achilles tendon injury. However, she could not compete for the remaining season due to pandemics. Later in November, Lee signed her National Letter of Intent with Auburn University.

In February 2021, Sunisa Lee participated on beam and bars at the Winter Cup, where Lee came first on bars. Though Lee’s performed a layout dimuon off of apparatus, she secured the third position behind Skye Blakely and Jordan Chiles. In a month of April, she participated at the American Classic and competed on uneven bars, floor exercises, and balance beams. Lee won balance beam and uneven bars by scoring 14.550 and 15.200 respectively. She came fifth on the floor exercise. Later, Lee competed at the US Classic for the balance beam and uneven bars in May. But she fell off both apparatuses, securing eight positions on beam and tenth on the uneven bar. Lee also featured on the Peacock docuseries Golden: The Journey of USA’s Elite Gymnasts.

The talented gymnast, Lee, participated in the 2021 National Championship in June. On the first day, she competed in an uneven bars routine with 6.8 difficulties, where she scored 15.3. She placed second, next to Biles in the all-around, first on the uneven bars, and second place on the balance beam. Along with this, Lee qualified to participate in the Olympic Trials.

On the first day of the Olympic trials, she performed all four routines and scored 15.300 in an uneven bar. However, Lee finished in a second position behind Biles. In the following day, she again hit all four routines and earned a 58.166 score, higher than Biles’ 57.533. Despite this score, Lee’s combined score of two days was less than Biles’, so she placed second in the competition. This made her qualified for the Olympic team along with Biles.

During the Olympic qualifications, Lee performed all-around and helped the US to qualify in the team final with a second position, next to Russian Olympic Committee. She performed all four routines and made up to the final securing third position, behind Simone Biles and Rebecca Andrade. Moreover, she came second in the uneven bars, behind Nina Derwael, and placed third, next to Guan Chenchen and Tang Xijing.

Initially, Lee was competing only on the balance beam and uneven bars in the team final, but after Biles step out from the competition, Lee was replaced on the floor exercise. She performed her all three routines, which includes her uneven bars routine, and scored 15.400, helping the US to win the second position next to Russia.

In the time of the all-around finale, Lee hit four of her routines, bagging the highest uneven bars score of the day, and won the gold medal. She is one of the sixth American Champions in the event along with Mary Lou Retton, Carly Patterson, Nastia Liukin, Gabby Douglas, and Simone Biles. At the same time, she is the first Hmong-American to win a gold medal in an Olympic Games. To honor her success, the governor of Minnesota, Tim Walz, and mayor of St. Paul, Melvin Carter, declared Friday 30th July 2021, as a “Sunisa Lee Day.”

Despite her performance on uneven bars, Lee scored 14.500 and won the bronze medal. Additionally, she placed fifth in the final balance beam.

Lee has won several medals for Women’s artistic gymnastics. They are:

A young and talented gymnast, Lee is active on social media. She has around 1.4 million followers on Instagram (sunisalee), 157.9 k followers on Twitter (Sunisa lee).