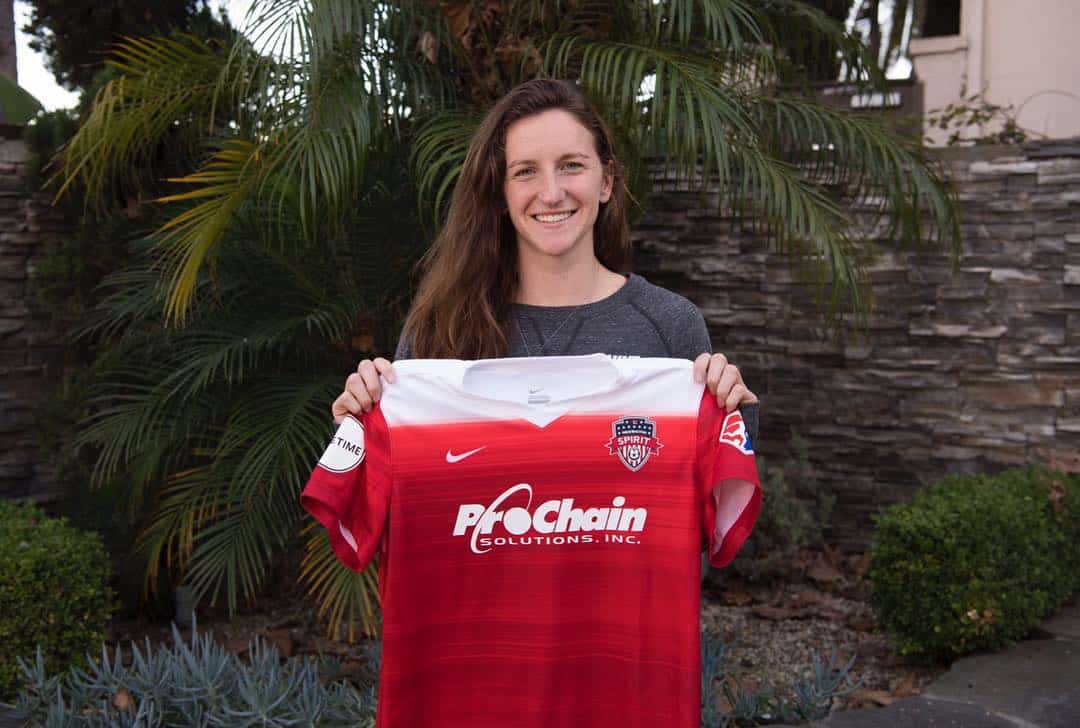 Andi Maureen Sullivan is an American football player. She plays for Washington Spirit of the NWSL, National Women’s Soccer League, as a midfielder, and she is also a member of the United States national team. She has been playing football since a young age. Also, she received many honors during her junior and senior years.

Andi Sullivan stands 5 feet 7 inches (1.7 m) tall and weighs 57 kg. She has light brown hair with a beautiful pair of blue eyes. In addition, Sam has an athletic body type, and she is of American descent.

Andi Sullivan has been playing football since her young age. She has received many honors and has achieved her goals in her junior and senior years.

Andi Sullivan attended Stanford University in Stanford, California. In her freshman year, she played 23 matches out of 24. She scored her first goal for the club in a game against the University of Dayton. Sullivan made the Pac-12 First Team, All-Freshman First Team, and NSCAA All-Pacific Region Second Team. Furthermore, she was also honored Pac-12 Freshman of the Year and National Freshman of the Year by Soccer America and Top Drawer Soccer.

As a sophomore at Stanford University, she played in all 23 games, scoring five goals and two assists. She was named the “Pac-12 Player of the Year and also earned All-Pac-12 first-team honors for three consecutive seasons. In her senior year, Andi Sullivan scored three goals with six assists and led the Stanford Cardinal to the national championship. She won the Hermann Trophy, a finalist in 2016, and a semifinalist in 2015.

On 18 January 2018, Andi Sullivan was selected at the 2018 NWSL College Draft by the Washington Spirit. She appeared in every match of the club, but she missed the last game she was completing in the Nordic Cup. Sullivan was named a finalist for 2018 NWSL Rookie of the Year but was voted first runner-up. She returned to the Washington Spirit and was named team captain for the 2019 NWSL season. Currently, she plays soccer, along with Lindsay Horan. Taylor Smith, Allie Long, and others.

Andi Sullivan has not only been active in the national game, but she has also been playing international matches in the football industry. She has played matches against many countries all over the world.

In a friendly match against Switzerland, Andi Sullivan earned her first cap on 19 October 2016. She was honored with the Player of the Match. Andi earned her first assist on 23 October, the second assist on 10 November, and the third assist on 13 November. During a college match on 18 November, she tore her ACL and missed a large part of the 2016 season. She finally made her return on 19 October 2017. Andi Sullivan named as the roster for the 2018 SheBelieves Cup, and the United States won the tournament for the second time. She was also named for the 2019 SheBelieves Cup.

Andi Sullivan is a professional soccer player. In her football career, she has received many honors starting from her college life to international games.

Some of her college awards are listed below:

Andi Sullivan is actively involved in social media such as Instagram and Twitter, and she regularly updates her profile. On exploring her social face, she is an adventurous person. She has an enormous number of fans and admirers over the social media landscape. Her Instagram username is @sunnysuli, having a total of 32.2k followers. She has made over 100 posts. You can also tweet her. She has around 10.6k followers with over 4.2k tweets, and her Twitter handler is @sunshine_sully. Besides this, she does not hold a Facebook account.

Andi Sullivan married Drew Skundrich, her long-term boyfriend and a professional soccer player. Drew Skundrich currently plays for the Sacramento Republic FC in the USL Championship. Andi and Drew started dating each other since their college days in 2013. After that, they got engaged in March 2019 and got married on 14 December 2019. On exploring her social account, they seem to be happy with their relationship. They share their photos on social medial frequently.

Andi Sullivan earns a healthy amount of salary. Most of her income comes from being a football player and also from endorsements. She endorse many brands, but not revealed on social sites. Moreover, her decent salary is expected to be $50,000. As in the year 2020, her net worth is roughly $1 million.

Some Interesting Facts about Andi Sullivan