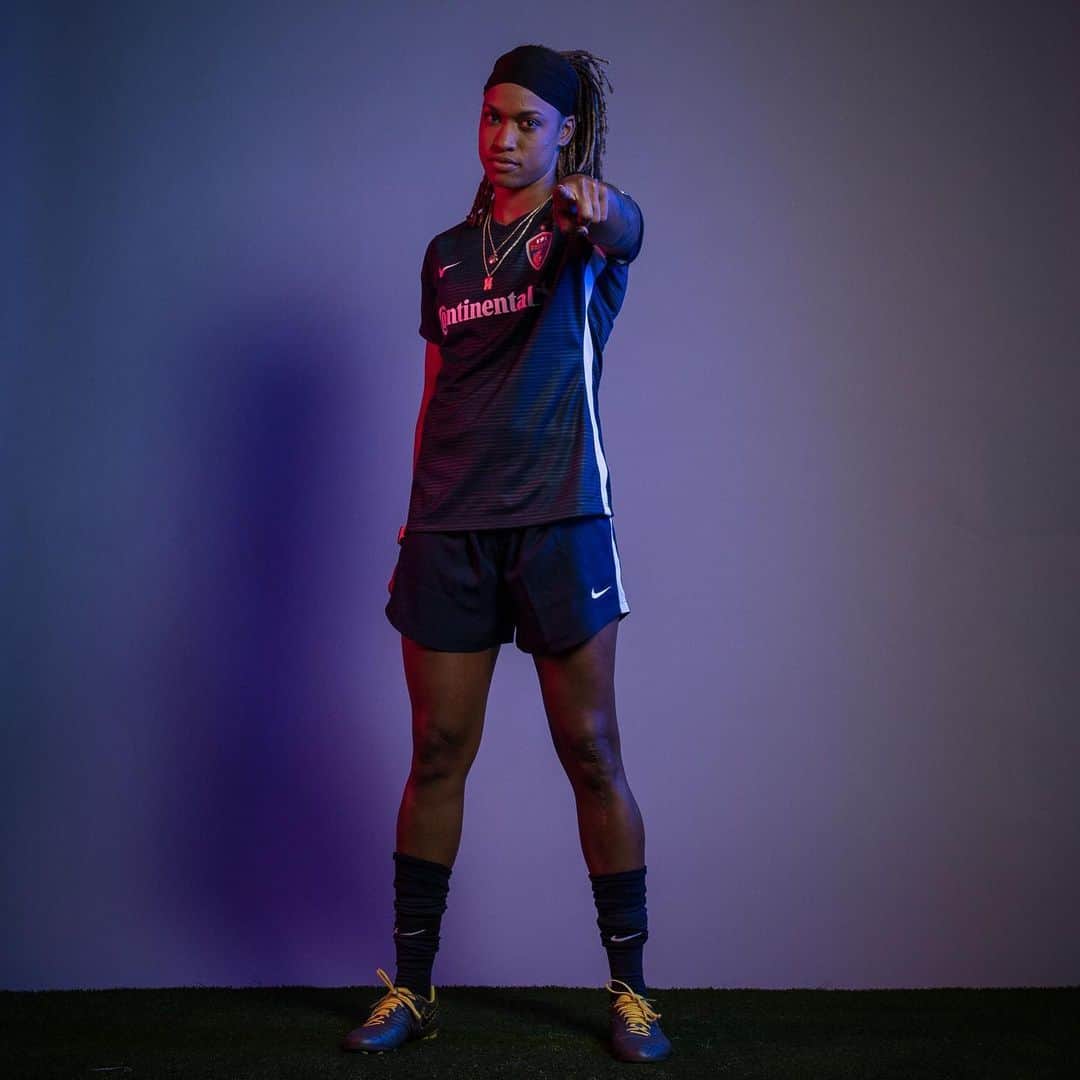 Jessica McDonald stands 5 feet 10 inches (1.78 m) tall and weighs 63 kg. Further, she has brown, dreadlock hair with dark brown eyes. Jessica has an athletic body and a toned physique. Affable smile, gleaming face, and tattoos on both her forearms, which distinguishes her.

The famous soccer player, Jessica McDonald, was born on 28 February 1988 in Phoenix, Arizona, United States. She was born to father Vince Myers and mother, Traci McDonald, and was raised in a family where her father was in and out of prison and her mother battled addiction. Moreover, Jessica was grown with her brother, Brandon McDonald, a professional soccer player of MLS.

Furthermore, Jessica McDonald has been playing football since a young age. She has received many honors and has achieved her goals in her junior and senior years.

Jessica McDonald attended Cactus High School in Glendale, Arizona. There she played basketball for four years. She was also a member of the state championship basketball team in 2004 and 2006. Jessica graduated from the Cactus High School as the school’s record holder for the four × 400 meter relay team, 100 meters, 200 meters, and 400 meters. Additionally, she played on the Surf Cup title-winning teams in 2005 and 2006, and she was also the MVP of the tournament in 2006.

After completion of her high school, Jessica McDonald attended Phoenix College. During her freshman and sophomore years, she played football, basketball and was a member of the honors program. Also, Jessica was named National Junior College Player of the Year and first-team junior college All-America in football. She was the single-season record holder at Phoenix College and the country’s number one rebounder in the junior college, and among the Top 30 in scoring. But, she was transferred to the University of North Carolina during her sophomore year.

In her sophomore year, Jessica McDonald joined the North Carolina Tar Heels during the first half of the 2008 season. She also helped the squad to win the national championship. Jessica scored five goals and had ten assists during the season.

In the year 2010, Jessica McDonald was the second pick by Chicago Red Stars in the 2010 WPS Draft. She suffered from a knee injury, which required 18 months for recovery. But she had already made her appearances in the squad before the injury.

For the 2012-2013 seasons, Jessica McDonald signed with the Melbourne Victory FC in Australia’s W-League. She helped the team to the Final match against Sydney FC in season 2-012-2013.

Jessica McDonald signed with the Chicago Red Stars in 2013 as a free agent for NWSL, National Women’s Soccer League. Before being waved by the team in June 2013, she made nine appearances and one assist.

On 28 June 2013, McDonald signed with the Seattle Reign FC. She scored her first goal for the Seattle Reign FC club in a match against Boston Breakers. After her three goals, she was ranked third in the team, tied with her teammates Christine Nairn and Kaylyn Kyle.

In late 2013, Jessica McDonald and defender Rebecca Moros was traded to Portland Thorns in exchange for Danielle Foxhoven. She started playing as a forward then as a substitute because Alex Morgan returned from an injury. Jessica McDonald is the leading scorer of the squad with eleven goals in the season, including the fastest goal in NWSL history, a 33 seconds goal against Chicago.

In January 2016, Jessica McDonald was traded to the Western New York Flash. She was named a Player of the Week for week 10, and she scored ten goals with seven assists. McDonald earned her first senior team call-up for the USWNT.

On 9 January 2017, it was announced that the Western New York Flash was officially sold to new ownership, moved to North Carolina, and was rebranded as the North Carolina Courage. In May 2017, Jessica McDonald became the first National Women’s Soccer League player to score 33 regular-season career goals. She helped North Carolina to win the NWSL Shield.

Jessica played 23 regular games in the season of 2018. She scored seven goals, and North Carolina broke the record for scoring the most goals in the 2018 season. Jessica McDonald scored two goals in the NWSL Championship game against the Portland Thorns by a 3–0. She was also named the “Most Valuable Player of the Match.”

Jessica McDonald has not only been active in the national game, but she has also been playing international matches in the football industry. She has played matches against many countries all over the world. Jessica has represented the United States on many youth national teams and senior teams. In 2007, Jill Ellis named Jessica to the U20 roster for the 2007 Pan American Games held in Brazil. She was the first call-up to the senior national team on 2 November 2016 and made her international debut on 10 November against Romania. In May 2019, she was named to the United States 23-player squad’s final roster for the 2019 FIFA Women’s World Cup.

Jessica Marie McDonald is a professional football player. In her football career, she has received many honors starting from her college life to international games. She has won many awards, including NWSL Champions- 2016, 2018, 2019, FIFA Women’s World Cup, SheBelieves Cup: 2020, and many more.

Jessica McDonald is actively involved in social media such as Facebook, Instagram, and Twitter, and she regularly updates her profile with pictures of soccer practice or time in exotic places. She is recently spotted in Paris. On exploring her social face, she is an adventurous person. At the same time, she has an enormous number of fans and admirers over the social media landscape. Her Instagram username is @jmac1422, having a total of 82.4k followers. She has made over 1k posts. You can also tweet her. She has around 39.2k followers with over 3.7k tweets, and her Twitter handler is @J_Mac1422. The official Facebook page of Jessica McDonald is @JesiscaMcDonaldSoccer, with over 26k followers and 6.7k Facebook likes.

Talking about her relationship, Jessica McDonald is married to Courtney Stuart. The couple is blessed with a son named Jeremiah. On exploring her social account, Jessica has not shared her husband’s single photo, which created a rumor that they might be divorced.

Jessica McDonald is paid a healthy amount of salary. Most of her income comes from being a football player and also from endorsements. In addition, she has done endorsement works for brands like Nike and Coffee Infused Macro Bars. The players of NWSL are expected to receive a salary in the range of $16,538-$ 46,200. Also, she is estimated to collect an impressive net worth of $1.5 million.