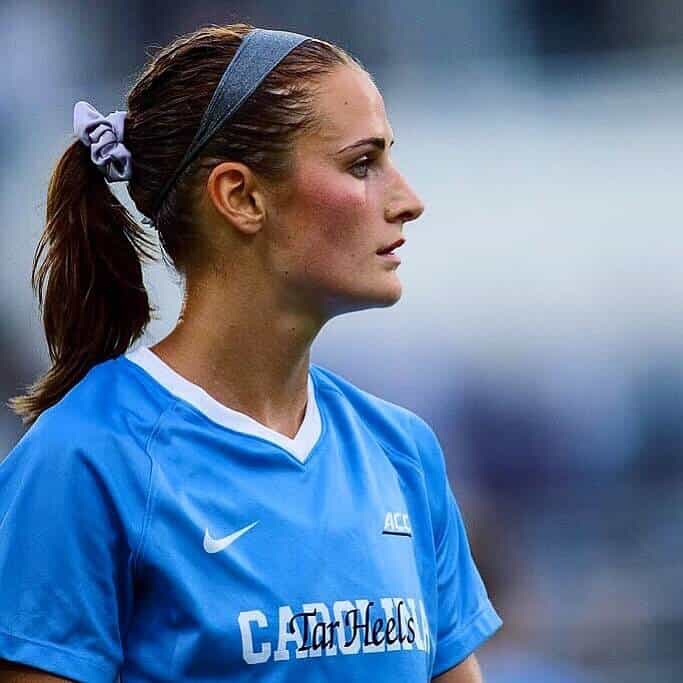 Emily Ann Fox is a professional football player and a national of America. She plays for North Carolina Tar Heels as a defender, and she also represents the United States at the international level.

The famous soccer player, Emily Fox, was born on 5 July 1998 in Ashburn, Virginia, United States. She was born to her father Alex Fox and her mother, Leslie Fox. Emily Fox grew up in her hometown with her parents and her siblings Garret and Lauren. Garrett Fox is aged 22, and Lauren Fox is aged 17. Fox has had a keen interest in football since her childhood.

Emily Ann Fox has been playing football since a young age. She studied at Stone Bridge High School, and she was a member of her high school team Stone Bridge Bulldogs in the year 2014. Emily played one year of varsity soccer in high school before concentrating on her youth national team. She led the Stone Bridge to the VHSL 5A State Championship game.

After completion of high school, Emily fox attended the University of North Carolina. In 2017, she started playing her first 13 games of the freshman season with the Tar Heels. But she suffered from a torn ACL, so she could not play the remaining matches of the season. Emily was named the 2017 All-Freshman Team and the third team 2017 All-ACC.

In the year 2018, Emily Fox returned to the starting lineup. She played eighteen straight games at one point. Because of her call-up to USWNT, United States Women’s National Soccer Team, she missed the ACC Tournament Semi-Final and Final matches, and she also missed the first round of the NCAA Tournament. In the 2018 College Cup, North Carolina made up to the finals but was defeated against the Florida States by 1-0. Emily Fox was named the 2018 first-team All-ACC.

Emily Fox is a versatile soccer player, and she started her club career in the year 2017. She is a long-time member of national youth teams and the USSF U-20 team in 2017. In April and May, Fox was a pair of team camps in California. She was named to the Best XI team at right defender in the 2015 U20 CONCACAF. Fox participated in the 2015 Nike National id2 Training Camp held from 28 July to 1 August. Emily was also a USSF U15 girl’s national team camp in Dallas, Texas, and she even attended the 2013 Puma Women’s Elite Soccer Event.

Emily Fox has not only been active in the national game, but she has also been playing international matches in the football industry.

In November 2018, Emily Fox received her first call-up to the senior national team for Europe’s friendly matches. She even won her first cap on 8 November 2018. Before being named the 2019 SheBelieves Cup, Fox was named a practice player for the USWNT training cap. Emily Fox was added to the roster as Danielle Colaprico had to withdraw from the squad because of her injury.

Emily Fox is an associative professional soccer player. She has not received any awards, but she received many honors in her football career from her high school life to international games.

Some of her college honors are listed below:

Some of her national honors are listed below:

Emily Fox is relatively involved in social media such as Facebook, Instagram, and Twitter, and she does not update her profile regularly. On exploring her social accounts, she has a few numbers of fans and admirers over the social media landscape. Further, she has 17.2k followers on her Instagram account, ___emilyfox. You can also tweet her. She has around 1,933 followers with only 24 tweets, and her Twitter handler is @__emilyfox.

Emily Fox is paid a healthy amount of salary. Most of her income comes from being a football player. Her salary is not disclosed yet. As of the year 2020, her net worth is roughly $1 million.

Some Interesting Facts about Emily Fox