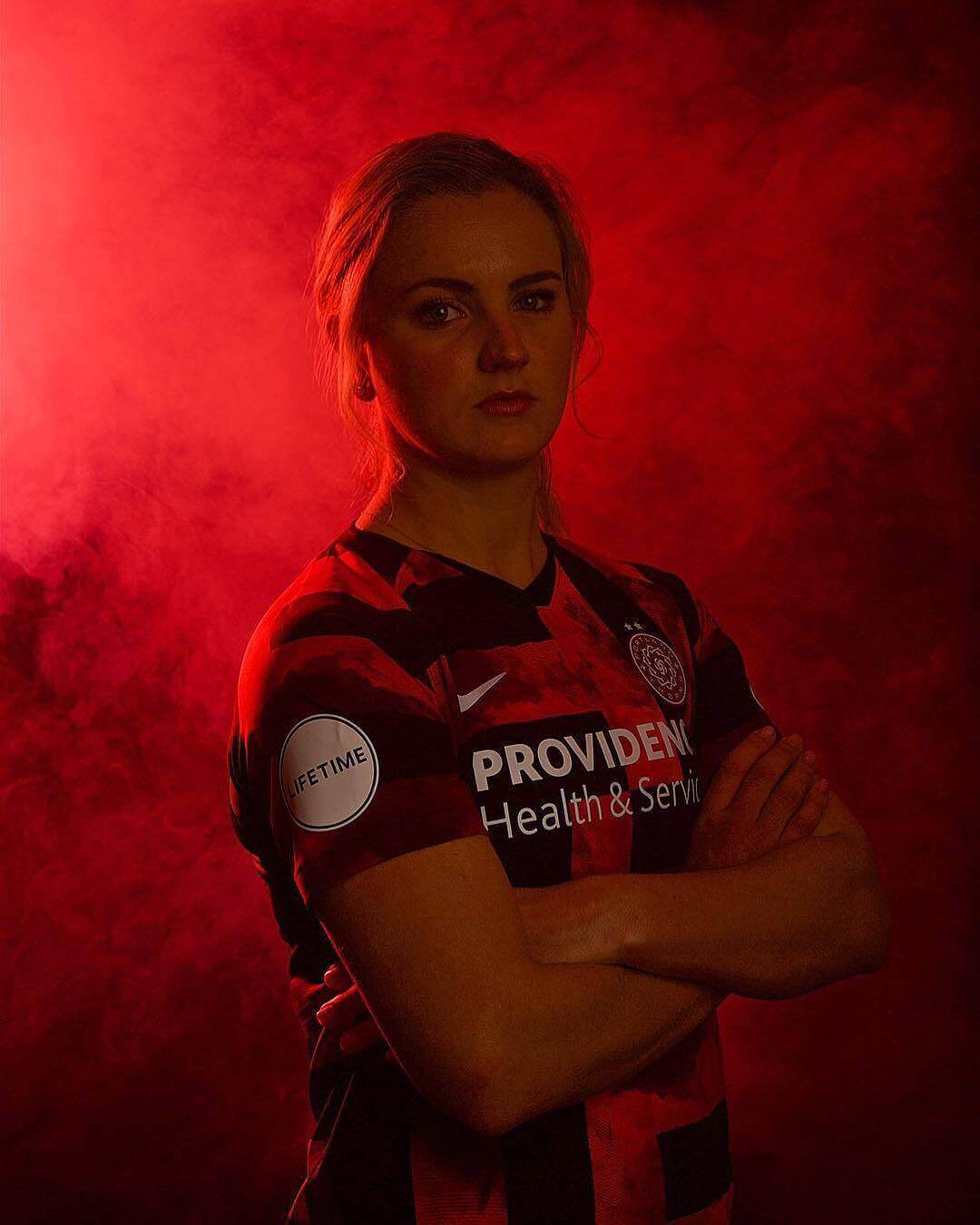 Lindsey Michelle Horan is a professional American soccer player. She plays for the Portland Thorns FC of the NWSL, National Women’s Soccer League, as a forward, attacking midfielder, and central midfielder. She is also a member of the United States national team. Lindsey Horan played soccer when she was five and has achieved many honors during her football career. Grown in the former gold rush mining town of Golden, she was nicknamed Golden girl.

Lindsey Horan stands 5 feet 9 inches (1.75 m) tall and weighs 68 kg. She has long, straight blonde hair with green eyes. Horan has an athletic body type, and she is of American descent. She appears to be tall and has a stunning body measurement. Radiant face, toned skin, spotted patch on her neck, and dimpled smile are some of her distinctive features.

The famous soccer player, Lindsey Horan, was born on May 26, 1994, in Lakewood, Colorado, United States. She was born to her father Mark Horan and her mother, Linda Horan. Lindsey grew up with her older brother, Michael Horan, in Golden, Colorado.

Lindsey Horan has been playing football since a young age. She has received many honors and has achieved her goals in her junior and senior years. Horan studied at Golden High school, and later she attended the University of North Carolina.

She didn’t play soccer for the school, but she played club soccer with the Colorado Rush. When Lindsey was 15 years old, she started playing for the Colorado Edge and was one of the youngest players on the United States U-17 women’s national team. She appeared in nine games and scored 12 goals. Though she didn’t play high school soccer, she was named on the Parade Magazine High School All-American team. Horan had the scholarship to play for North Carolina, but she dropped her college career and signed with Paris Saint-Germain FC, a French club.

Lindsey Horan started her club career in the year 2012. She has played for soccer clubs such as Colorado Rush and Paris Saint- Germain. She is currently playing for the club Portland Thorns FC as a forward, attacking midfielder, and central midfielder. Horan began playing for clubs while she got the scholarship at the University of North Carolina.

During the 2012 season, Lindsey Horan played for the Colorado Rush in W-League. She appeared in three games and scored two goals by taking 19 shots.

Lindsey Horan signed a deal to play with a French club, Paris Saint-Germain FC, in July 2012. She played her final match on December 5, 2015, with a 5-0 win over FCF Juvisy. Horan appeared in 58 games and scored 46 goals for the club. On January 4, 2016, the club announced that Horan’s contract had been terminated to allow her to return to the United States.

On January 13, 2016, Lindsey Horan signed a contract with the Portland Thorns FC of the National Women’s Soccer League, NWSL. She played as a central midfielder for the club. In the 2017 NWSL Championship, she scored only one goal in the match against North Carolina Courage, and the Portland Thorns won the game with a win of 1-0. She was named NWSL Championship MVP and Player of the Month for July 2018. Horan was also named 2018 NWSL Best XI and 2018 NWSL Most Valuable Player.

Lindsey Horan has not only been active in the national game, but she has also been playing international matches in the football industry. She has played matches against many countries all over the world.

During her time at the Paris Saint-Germain FC, she returned to the national team in a central midfielder role. Lindsey Horan was called up for the 2019 FIFA Women’s World Cup, where she scored her first world cup goal in the match against Thailand. With the assisting goals of Tobin Heath and Lynn Williams, Horan scored her first career hat-trick score in the 2020 CONCACAF Women’s Olympic Qualifying Championship against Panama on January 31, 2020.

Lindsey Horan is a professional football player. In her soccer career, she has received many honors starting from her college life to international games.

Lindsey Horan didn’t play soccer during her college days. Yet, she was able to be named Parade Magazine High School All-American during her sophomore year at Golden High School.

Lindsey Horan is actively involved in social media such as Facebook, Instagram, and Twitter, and she regularly updates her profile. On exploring her social face, she is an adventurous, fun, and pet-loving person. She has a vast number of fans and admirers over the social media landscape. Her Instagram username is @lindseyhoran10, having a total of 257k followers. She has made over 470 posts. You can also tweet her. She has around 138.6k followers with over 3.9k tweets, and her Twitter handler is @LindseyHoran. The official Facebook page of Lindsey Horan is @LindseyHoranOfficial, with about 128k Facebook followers and 20k Facebook likes.

The famous soccer player has not disclosed anything about her dating life in public. As in social media, Lindsey Horan is still unmarried and currently single. Like most celebrities, she loves to keep her personal and dating life private.

Lindsey Horan is paid a healthy amount of salary. Most of her income comes from being a football player and also from endorsements. She has done acceptance works for brands like Nike, Coca-Cola, Chapstick, and Secret. Lindsey has been sponsored by Adidas, Living Proof, Secret Deodrant, and Brew Dr. Kombucha. Her decent salary is expected to be around $600,000 to $650,000 for 2020. As of the year 2020, her net worth is roughly $2 million.

Some Interesting Facts About Lindsey Horan